One of these days I will stop saying, "This should be easy to do!"  Those are possibly the stupidest words I can say when thinking about doing a project.  Why?  Because in my world it is a curse.  Somewhere in the whispy recesses of Costumeland, resides an evil witch whose sole job it is to hear these words.....joyfully, hopefully and erroneously muttered by every seamstress.  When these words reach her boil covered pointy ears, she extends forth her withered bony hand and in an ancient language long unheard, casts a spell on EVERYTHING that I feel "should be easy to do"!  Gah!  She is an evil crone I tell you!!!  Then her psychotic twin, the Queen of OCD gleefully takes the reins of insanity and won't rest until I have re-constructed an entire garment....sometimes up to 3 times.

This was the case with the 1912 Sailor Suit.  Last weekend I thought I had the skirt of the dress all squared away.  I posted pictures here and was so excited about it.  I went to my Mom's house to get ready for Colton's birthday party and joyfully showed Mom the pictures and the inspiration...then I noticed that the side button placket at the bottom of the skirt was on the back.....not on the side as I had done....
grrrrrrrrrrrrrrrrrrrrrrrrrrr-ness!!!!!

After Colton's party, we came back home where I proceeded to employ my seam ripper to the offending skirt.  While the seams were out, I decided to add two more panels to the skirt as it was very hobbly in its existing state.  I tried it on after I got everything back together and the sides were really weird.  They stuck waaaaaaaay out as the pattern was intended to be a hobble skirt.  So, now I had straighten the side seams out.  This I had to do 3 times before the thighs ceased looking like jodhpurs.  Then I had the insane idea to put the hook and eye opening on the right side and not the back.  Fine.  Are we finished yet?

I sure do hope so. 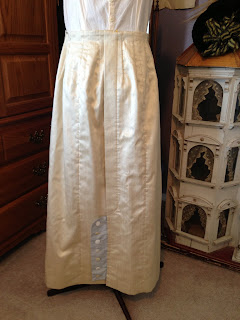 Bottom button placket moved to the back....looks much better. 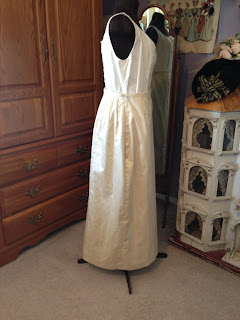 Side opening on the right instead of the back...

Now for the bodice.  I think maybe I'll say, "Man, I just know this is going to be a colossal pain in the rear!!!"  Let's see what that gets me!!