Putting Re-purposed Straw to Good Use!

I don't have a pattern for a 1920s era cloche, so for this hat, I decided to use the Ivory Silk Ruched cloche I made last month.  It was the perfect shape and in all actuality, I wanted this hat to be a little looser on my great big noggin. 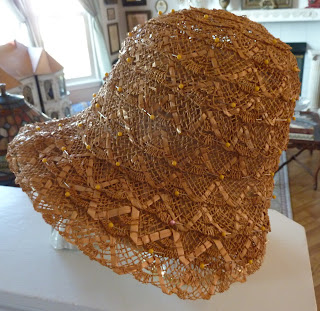 Starting with the already started top of the hat....(I learned this a long time ago when using straw from an "already hat".  The makers of the "already hat" have generously started your hat for you!  Isn't that nice of them?  Just stop the destruction of the "already hat" when the crown is about the size of a frozen juice can lid.  Believe me, it will save you much, much, work!)...and working down, I just tucked the lower level beneath the upper level, pinning as I went.  At the bottom, I made the brim oblong to emulate my inspiration. 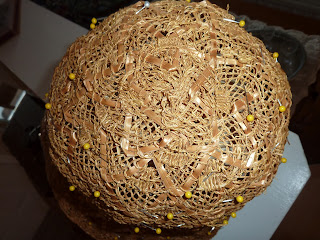 Image of the "already made" top of crown! 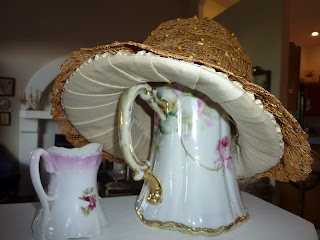 New cloche on "frame" of Ivory silk cloche.  Because I am not blessed to own a millinery sewing machine, I had to hand tack the straw together... 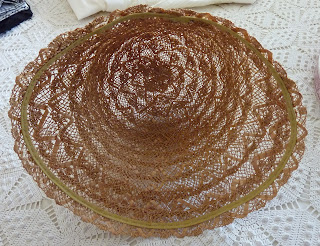 Alright...everything from the old hat was used for this new one.  I used the already covered wire for the brim so it would hold its shape! 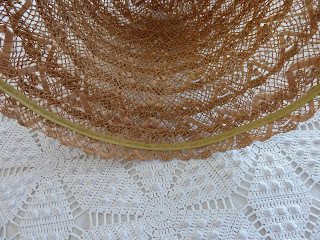 After machine sewing on the wire, I hand tacked a strip of the straw on top of the wire to "hide" it!

Email ThisBlogThis!Share to TwitterShare to FacebookShare to Pinterest
Labels: 1920s, cloche, Do it Yourself