Another of my "goals" in Historical Dress reproduction is to have a mourning gown from every era from the 1830s to the 1920s.  (this last date may go later, like to the 1950s, we shall see....)  It was going to be that every October I would work on a mourning outfit to wear on All Hallow's Eve and take photos at one of the surrounding cemeteries, but so far, that has only happened every other year or so.

This year, my mourning dress will be of the 1840s persuasion.  After watching many of the Jane Eyre movies (1983, 1996, 1997, 2006, and 2011) I fell in love with the somber look of Jane's clothing and the beauty of her black dresses.  I can't explain why I love this look.  There is just something about the movie, the setting, the clothing, that lends itself to sadness and mourning.

About 5 years ago, Greg and I went to Vancouver, BC and I was in a fabric shop called Dress Sew (if you get to Vancouver, this is a MUST GO shop!!!) and I found some light weight black wool for 9.00 a meter.  I purchased 9 meters thinking I would use it to make an Edwardian mourning dress.  Then I started watching the Jane Eyre movies and my mind was changed for me!

I am going to be sharing my inspirations for the dress, bonnet and underwear in this post along with the completed corset!!

Obviously the movies are a great inspiration, but also too are the wonderful dresses that were part of the "Death Becomes Her" exhibit at the MET last October (No I did not go.  Yes, I am still mourning the fact that I didn't.)  The two dresses from the 1840s totally take my breath away with their simple elegance!!! 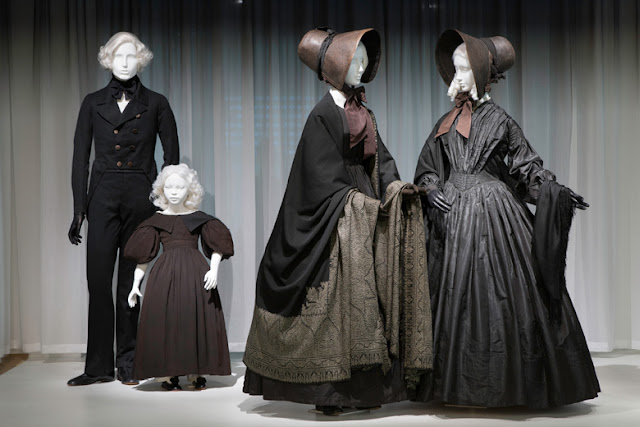 I would totally give my eye teeth for that charcoal on black pashima shawl!!!! 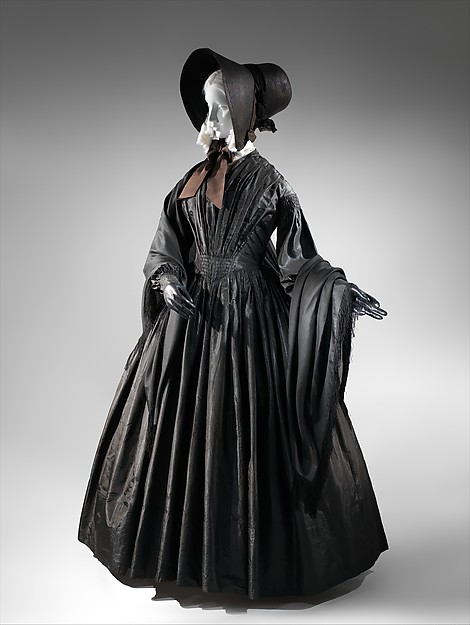 I so love how shiny this silk is!!!  It is a gorgeous dress and what I will be patterning my dress after. 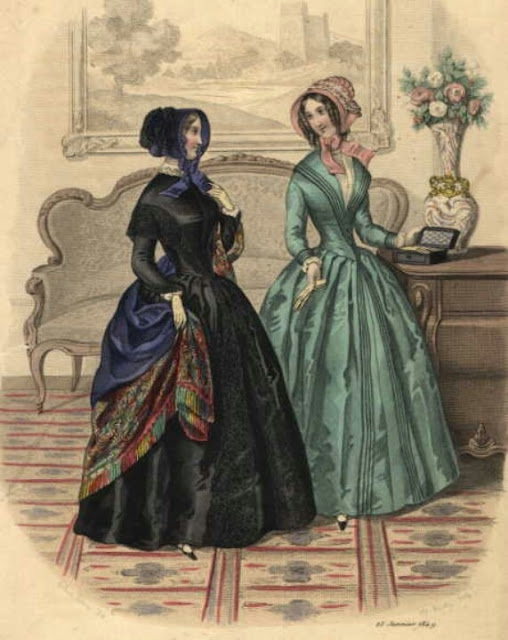 So yes, my dress will be second mourning as I don't own a mourning pashima shawl, but have a most gloriously colored one (here is the post about mine.)

I also want to wear a gold tone watch chain and a fabulous antique hair mourning brooch...sooooooooo, second mourning it will be!!

My lovely friend Kat sent me some real silk crepe a while ago and I have been saving it to make a mourning hat or bonnet.  I found the perfect 1840s bonnet from the Museum of Fine Arts in Boston.  There is another lovely example from Whitaker Auction site.  I will be using one of Lynn McMaster's patterns for mine! 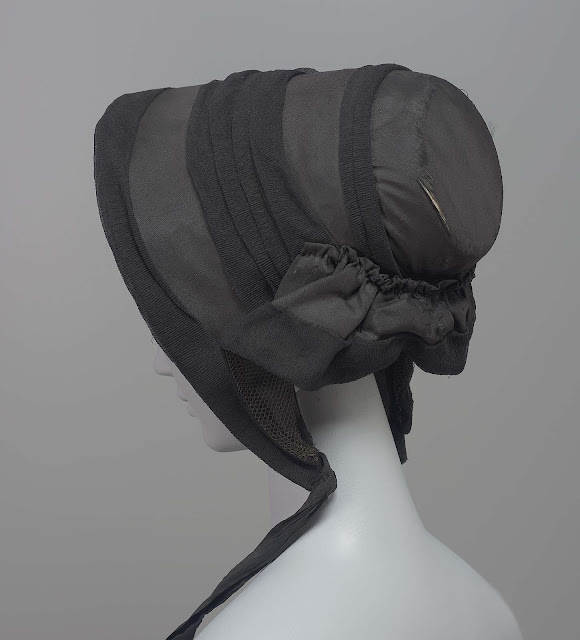 LOVE the crepe bands on the bonnet!

For the underwear, I have already made a new corset that is suitable for the 1840s.  After doing some research, I discovered that loop and stud busks weren't used until after the era of my dress so I used a wooden paint stick for my busk.  I did have a lovely "real" wooden busk that I ordered online, but we won't discuss what happened to that one...it has something to do with a jig saw and a splitting in the total wrong direction.

The inspiration for the corset came from several different sources.  Below is the one I attempted to copy to the best of my ability.  It is from The MET.  I love the stays that are placed on the angle.  I haven't gotten to the flossing on mine as my fingers and hands are severely angry with me at present.  Another inspiration is from Abiti Antichi. That one has shoulder straps, but since my shoulders and straps are not good buddies, I am opting for the strapless examples!!! 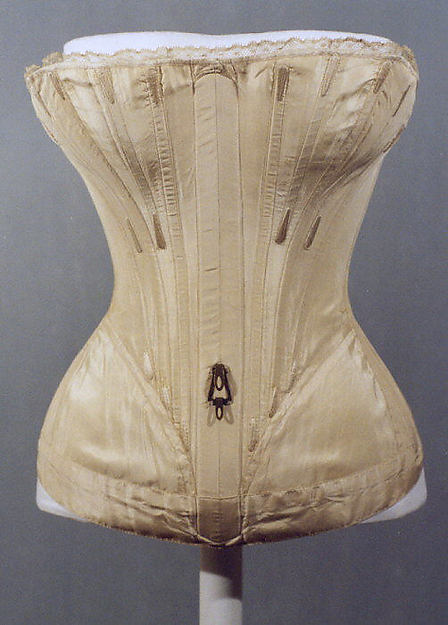 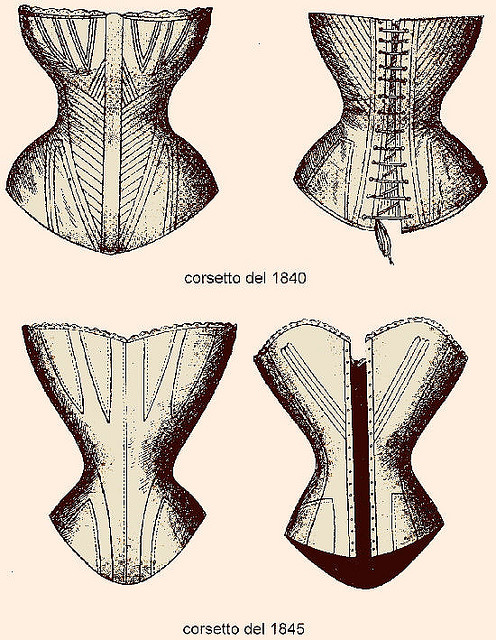 I found this on Pinterest, but can't find where it came from.  It shows closed front corsets from the 1840s.  Huzzah!!!

I have had this on my "to make" list for quite some time, but it really frightened me as it was a two piece with gore pieces pattern.  It is Simplicity 7215.  I did away with the stud and loop busk, placing the front pattern piece on the fold and just placed the boning like it appeared on the original from The MET.  I think it came out rather well!!  Please excuse the differing laces... I don't have one long enough to lace all the way! 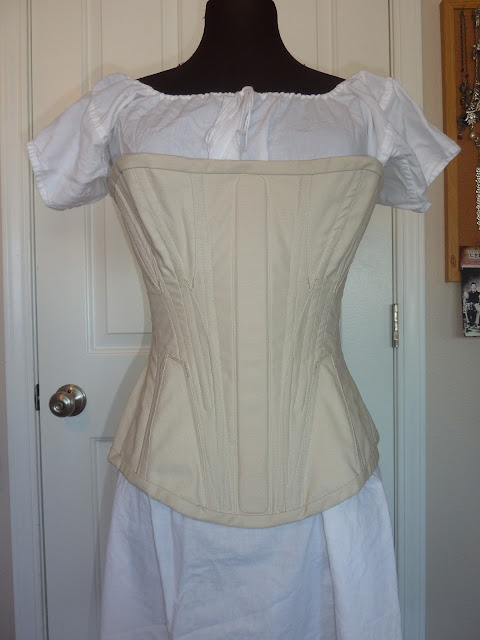 And of course Emma is too emaciated to look good wearing my corset.  Poor thing.  I need to fatten her up! 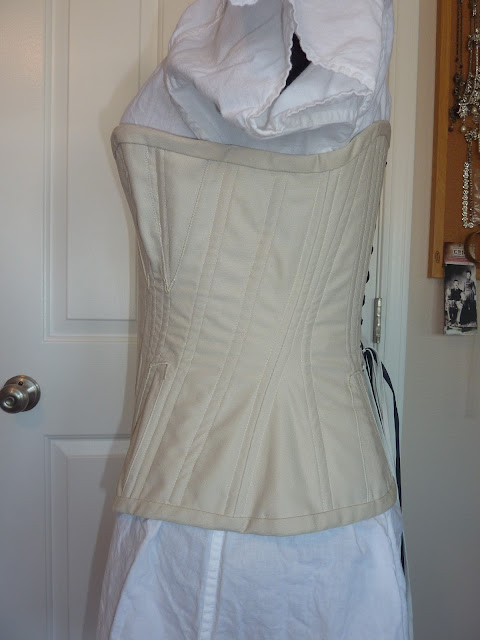 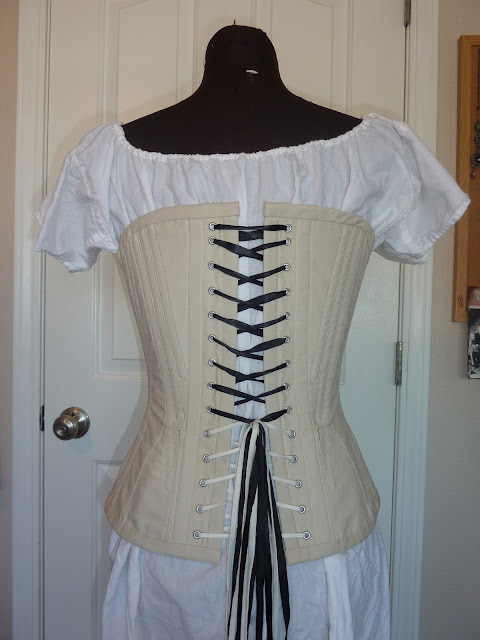 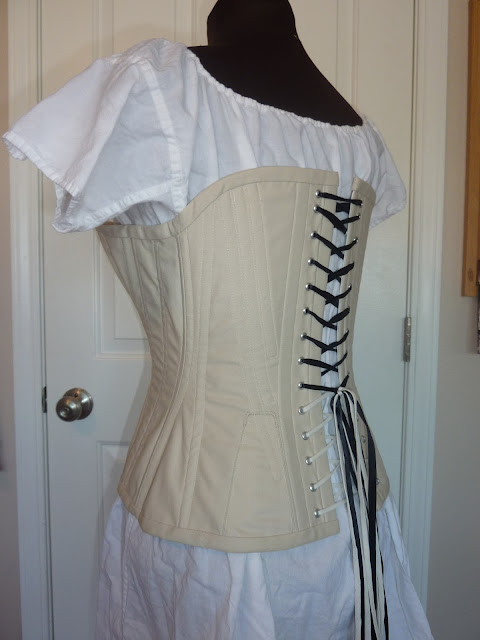 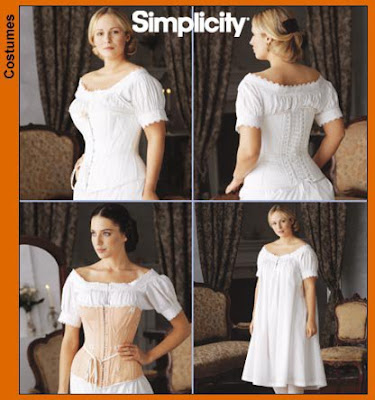 A very lovely corset to put together.  I just had to make the bust and hip gores smaller.  Other than that, it was a breeze!!!

I also plan on making a new corded petticoat (I already have one for the 1830s), one very similar to the very first image on Jennifer's Historical Sewing post on Corded Petticoats.  Also, if you have never made a corded petticoat, would really like to and are intimidated by them, I strongly suggest Jennifer's Corded Petticoat Workbook.  (I am in no way reimbursed for advertising about the workbook...it is just really that fabulous!!!)

I may or may not make a new chemise and drawers for the 1840s outfit before I need to wear it on All Hallow's Eve, but I do know I want to make a new set of first layers!

Ok, up next?  The corded Petti and 2 new full petticoats!!!

Be blessed my friends!