Monday evening, We Wear History got the chance to represent famous women in Idaho at an event for WASCO at the Idaho State Capitol Building.  There were five of us there, each researching our ladies and dressing as we thought they would have dressed.  I chose to be Clara L Campbell, the first woman to be elected to the House of Representatives in 1899!  How cool is that?  She did many, many things in her life time.  Sadly, there was not an over abundance of things about her that I could find, but what I did was quite impressive.  You can read about her here.

Since there wasn't a lot written about her, I decided to have a wee bit of creative license with her character and made a Suffragist sash for her.  I do know that she was a suffragette and so believed that she perhaps would have worn something to signify that!  Plus...you know me.  I love my sashes!!! 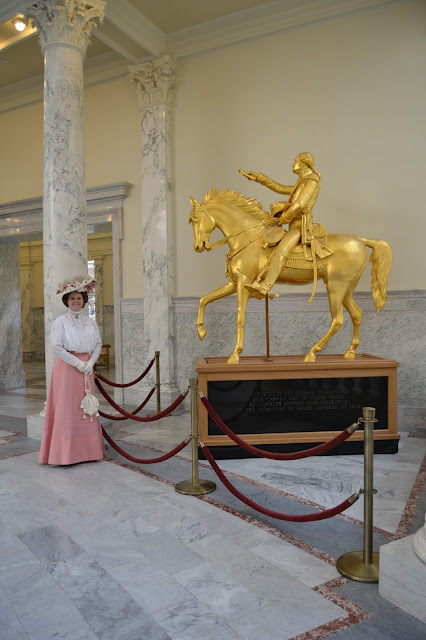 One of the Bills that Mrs. Campbell put before the House was

"An Act to secure the preservation of the equestrian statue of General George Washington, now in position upon the Capitol grounds."

The gold leafed statue of General George Washington is behind me.  I decided to set up my "station" by him.  He was carved out of a solid piece of Ponderosa (other sources say white pine and yellow pine) pine tree by an Austrian immigrant named Charles Ostner.  It was presented to the Idaho Territory in 1869.  I had a nice chat with Lieutenant Governor, Brad Little about it.  He informed me that before Charles carved the statue out of pine, he made it out of ice.  He got lost in the wilds of Idaho in the winter and a family took him in.  As he recuperated, he set about carving a statue out of the snow that had piled up and turned to ice.  After that, he started on the carving from pine.  How interesting is that? 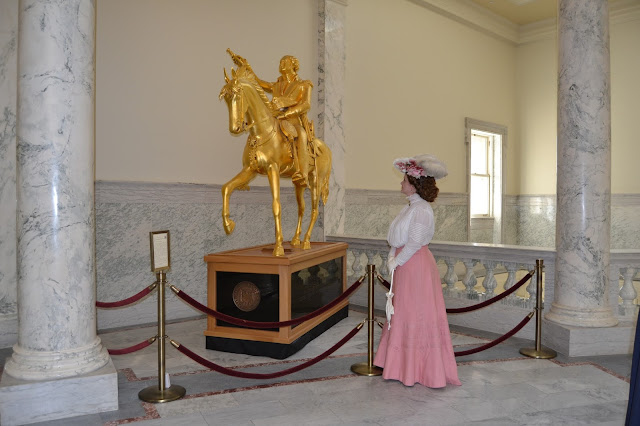 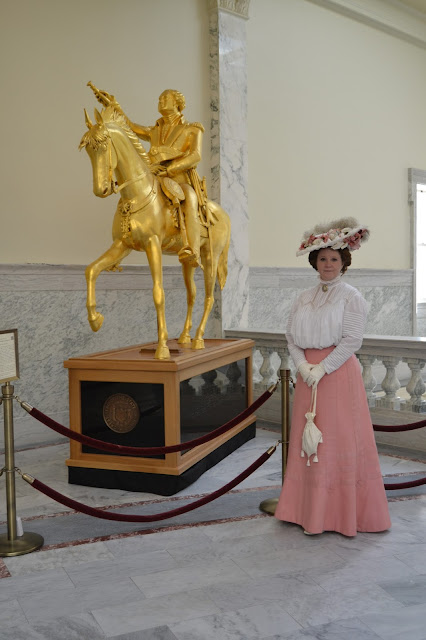 I absolutely adore my capitol building, "A Capitol of Light".  It is so beautiful, light, open and welcoming.  It is quite the stunning work of art. 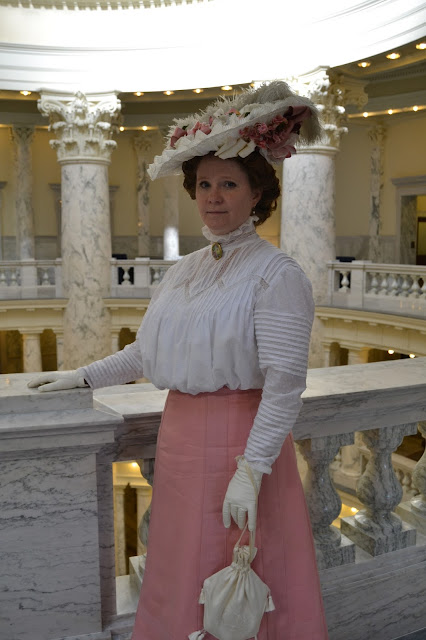 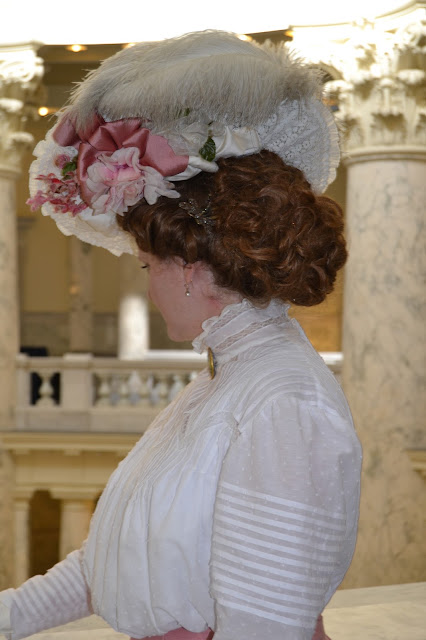 For this event, I resurrected my made-from-my-hair chignon.  I thought it would look great and work well for the bouffant hair styles of the Edwardian era.  Sadly, it fell apart after the event...but that's ok, it waited until after!! 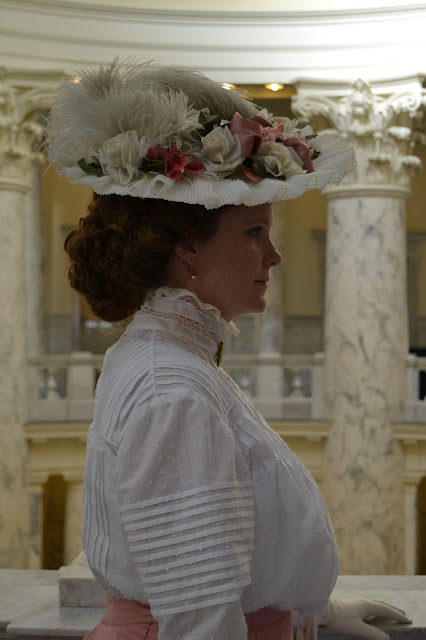 Great shot of the pouter pigeon pouf of the blouse!!  hahahahaha!! Too fun! 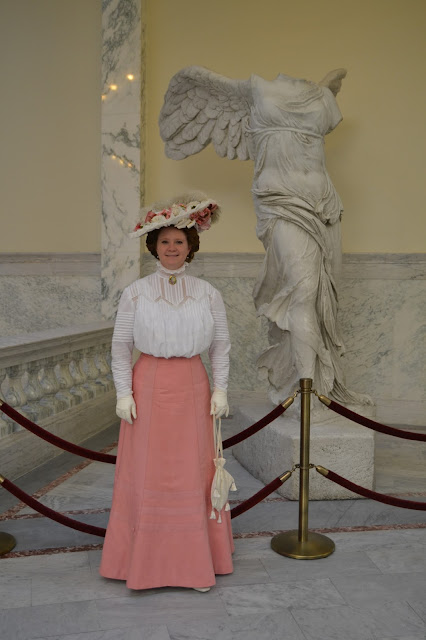 In front of the Winged Victory of Samothrace.  This replica was gifted to Idaho after WWII from France as a thank you for the support the U.S.A. offered during the war.  Each state in the Union received a train box car full of goodies!  It is a gorgeous statue and looks so beautiful in our capitol! 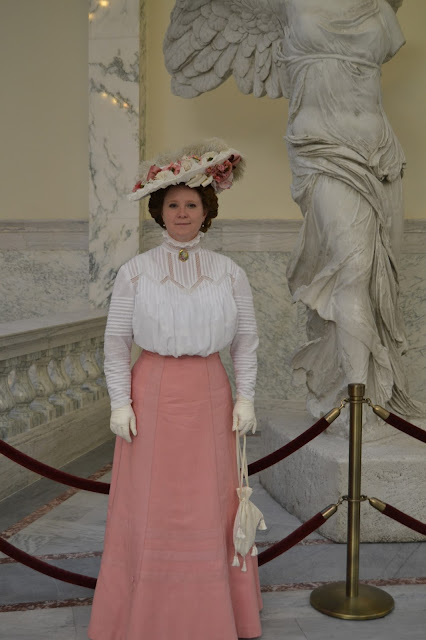 I think it was very thoughtful of the builders of the capitol to make it in colors that would go well with my dress!! 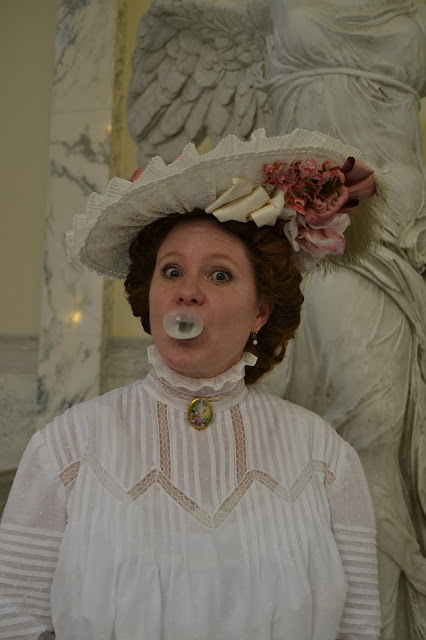 I couldn't have an event without a bubble shot!! 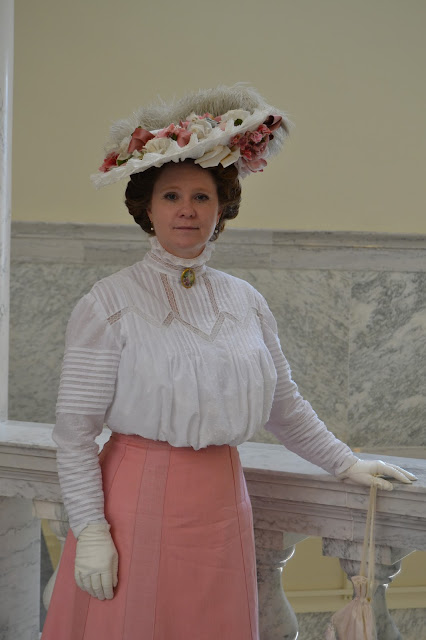 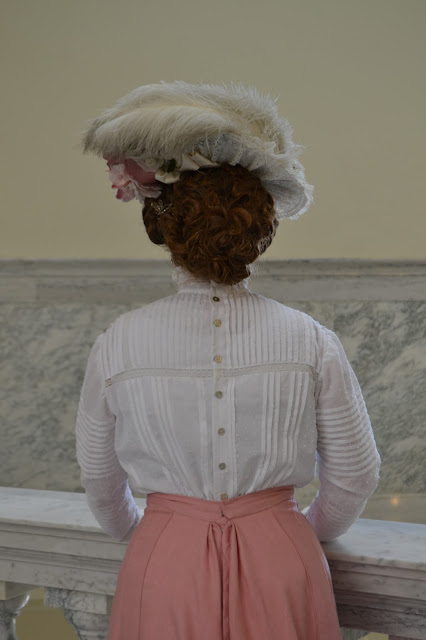 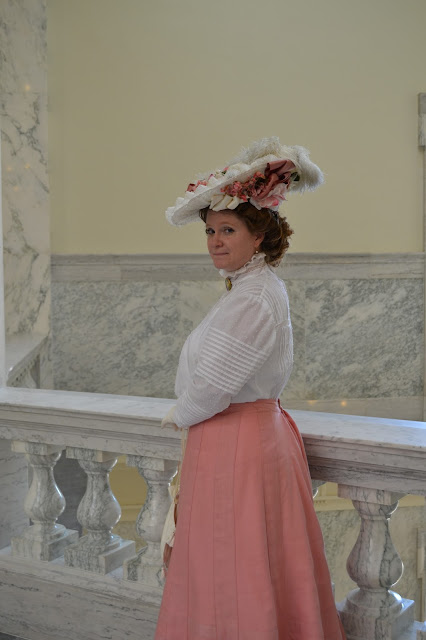 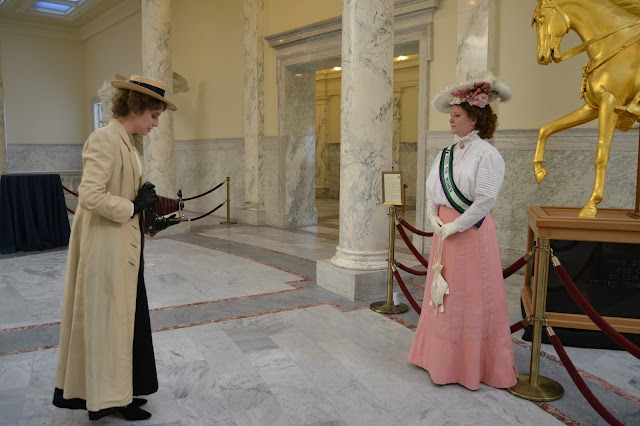 Aubrielle, attended the event as Nellie Stockbridge.  Nellie went into the many mining camps of Idaho as a photographer, chronicling Idaho for posterity.  I had pictures of Aubrielle taking pictures of us ladies like Nellie would have back then!  Nellie was taking images of Mrs. Clara L. Campbell at a rally....or something like that! 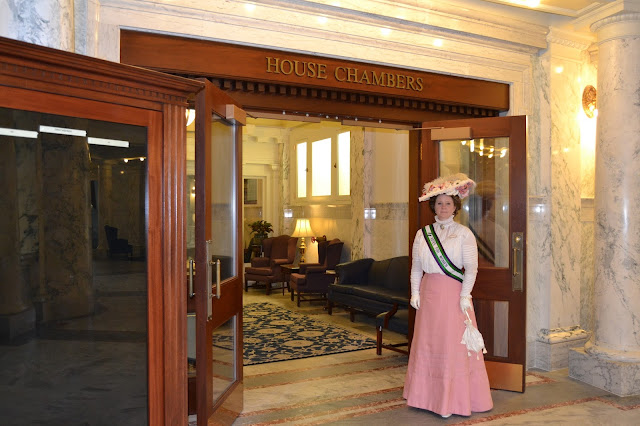 "Clara L. Campbell" at the entrance of the House Chambers.  Clara would not have sat in these chairs as the capitol was not completed until 1912...but the picture is a fun one anyway! 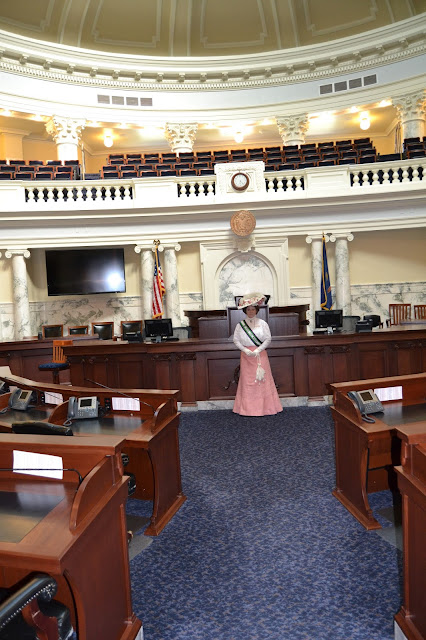 The chambers are even beautiful! 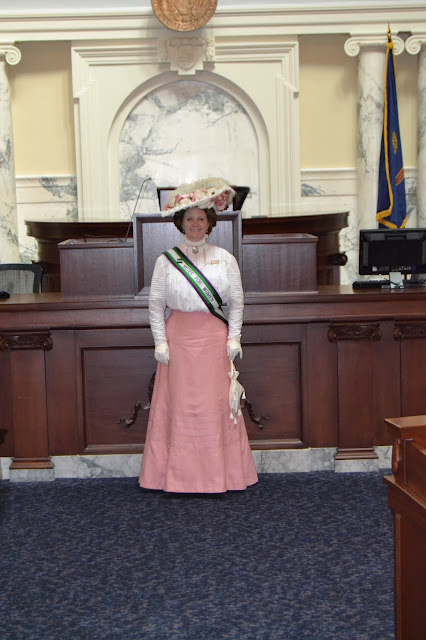 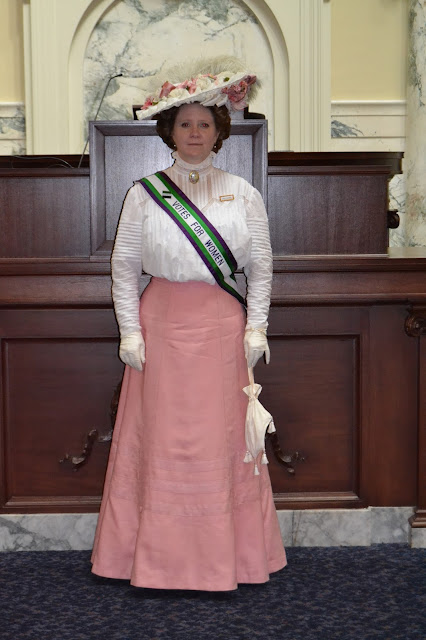 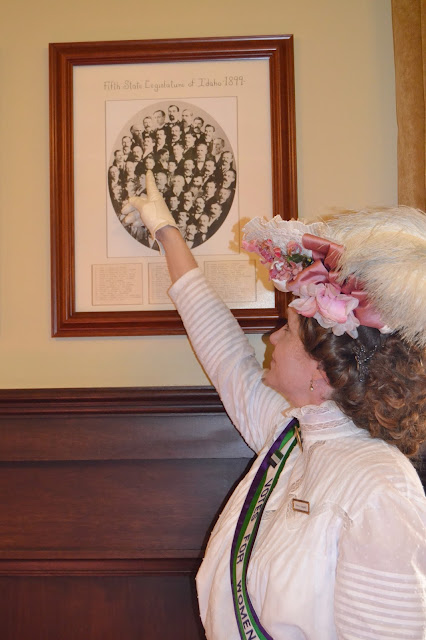 This is the picture of the 1899 representatives.  Clara is one of the three women who were elected to serve.  What a fabulous image!!! 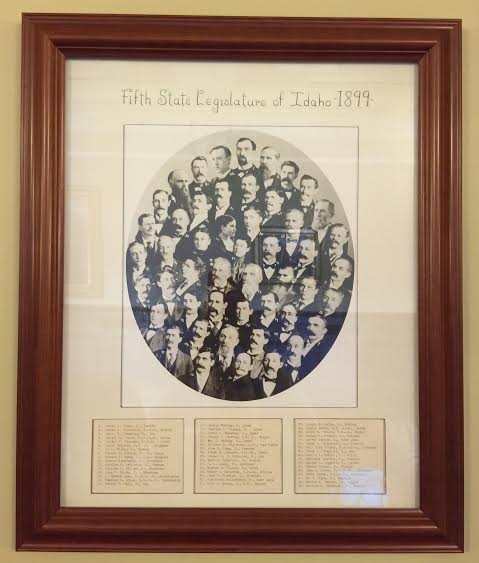 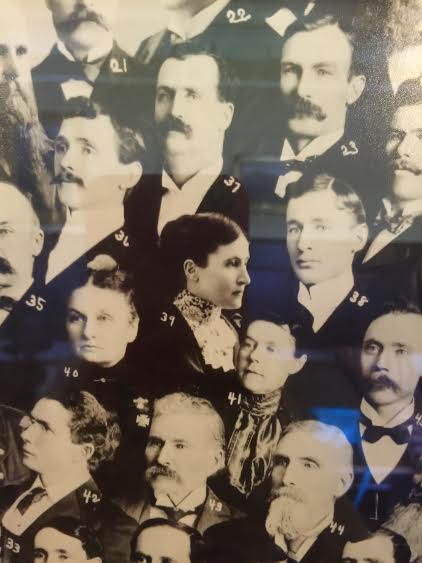 Some close ups of the picture with Clara (#40).  I love the collage of all the Congressmen (and Congresswomen!)!!

A really good picture of Clara can be found Here.  She is seated on the right.  I LOVE LOVE LOVE her dress!! 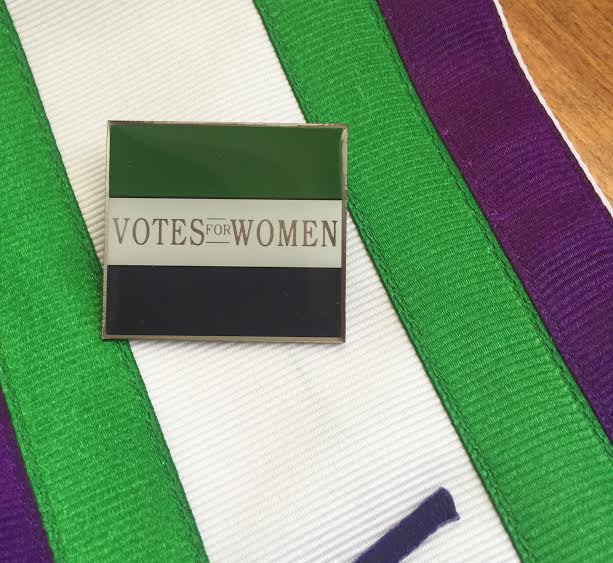 The fabulous Val LaBore of Time Traveling in Costume sent me this wonderful "Votes for Women" pin that a friend of hers purchased at the V&A museum in London!!  I love it!  It is the colors of the sashes worn by British suffragists during their suffragette era! 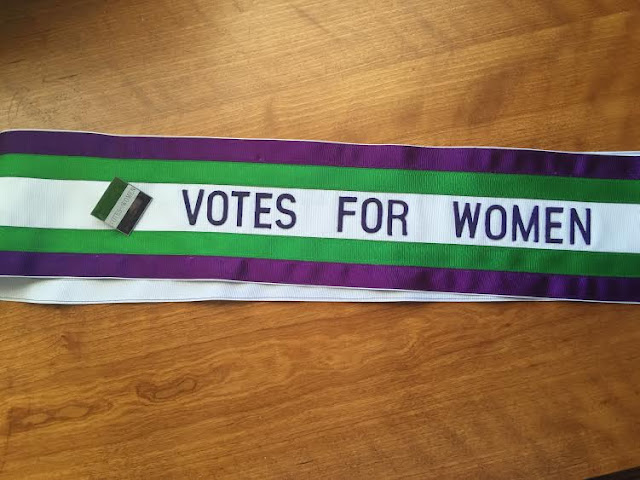 My sash was made of three colors and 2 sizes of gros grain ribbon.  The white ribbon was a 4" wide ribbon that I sewed the purple and green ribbons on to.  The iron on, embroidered letters had to be painted to match the purple ribbon as they came in navy blue.  The original suffragette ribbons were woven with the letters and purple and green stripes.  I don't own a ribbon factory, so had to make my own! 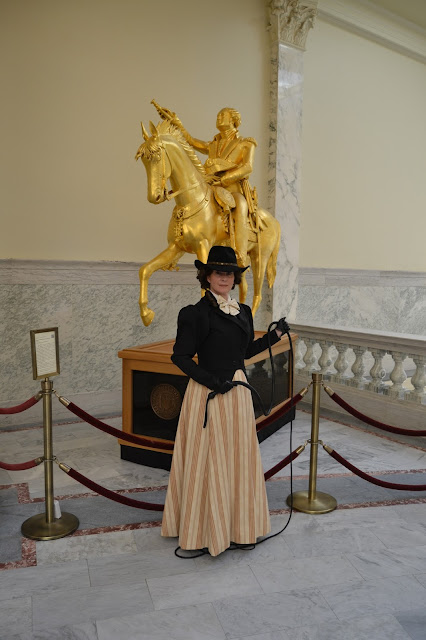 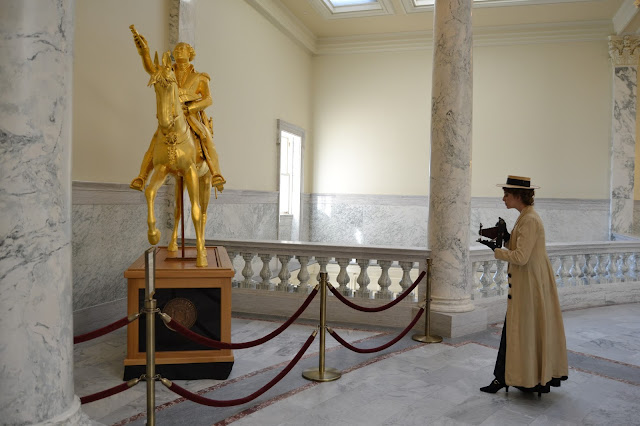 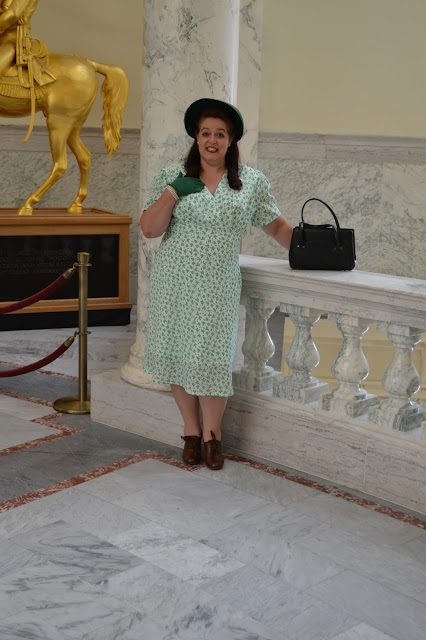 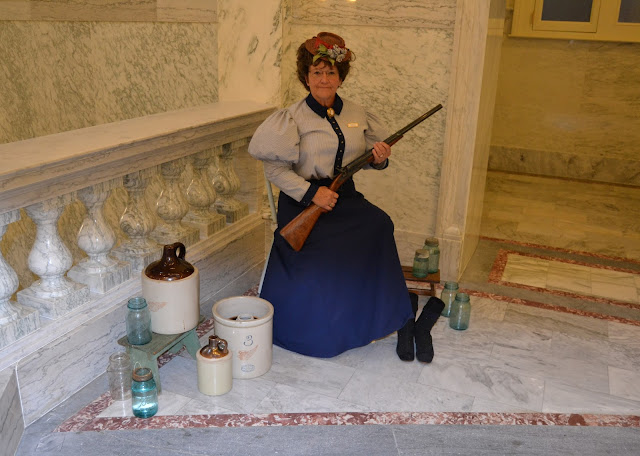 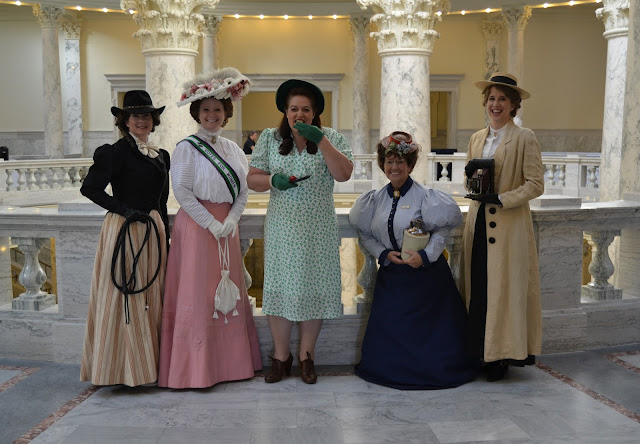 A fun shot of all us famous ladies!!

If you would like to see more images of our evening, go to our We Wear History Facebook page!

I really enjoyed portraying a person and doing the research on her.  I do believe this is something I would like doing more of!!

Be Blessed My Friends!