Right then!  Here we are at the wings for my Spelling Bee outfit!  I had thought of going to Savers or The Halloween Store to see if they had bee wings for me to use as I was quickly running out of time for my deadline, then just as the though popped into my head, it popped out.  For this outfit, because I had spent a bit of time researching it and was using non-Halloween-costumy fabrics and trim for it, I wanted wings that would look like they belonged to a) this outfit and b) 1884.  I had a bit of thinking to do.  I slept on it and as I usually do, obsessed about it.  Finally, an idea hit me...I could use cardstock and underwonder the yellow silk fabric to it!  Huzzah!  And low and behold it worked!!! 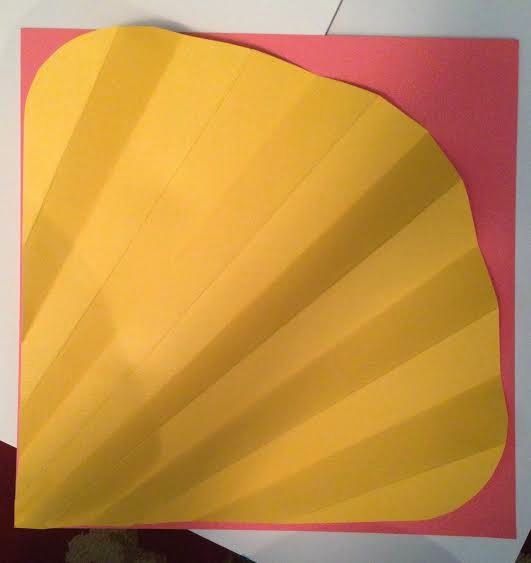 The first thing I did was make a smaller pair of wings using 12x12 sheets of cardstock.  I basically wanted to see if my idea would work.  I folded a piece of the cardstock in half diagonally.  Starting on one side of the fold, I began to accordian pleat the cardstock using the point of one side as the "bottom" of the wing.  Again, I basically eyeballed the whole thing...sorry!  You can see in the above image that the wing took on a nice fan shape, which is what I was going for. 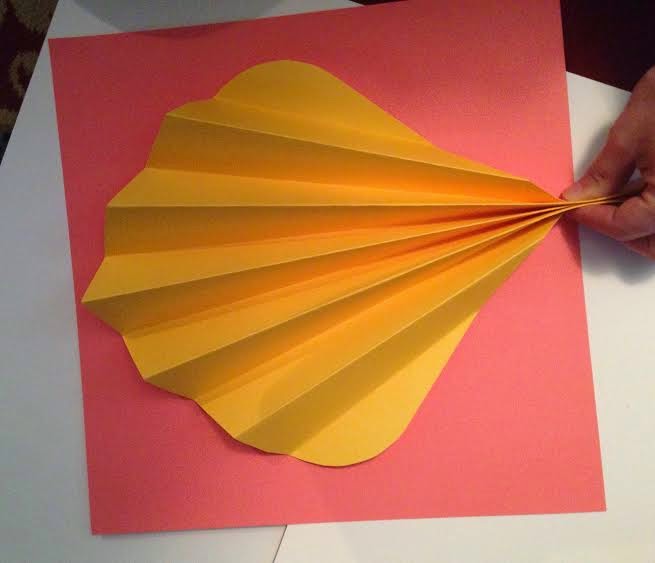 Here I have pinched the bottom of the wing to see if the whole look was right.  I did end up rounding off the top (the left side of the wing in the image) as I felt it was too pointy.  To do this, I un-folded the pleats, folded it in half on the diagonal and drew line where I thought it would look better.   Then I cut off the excess paper.  The result was a flatter, rounder wing. 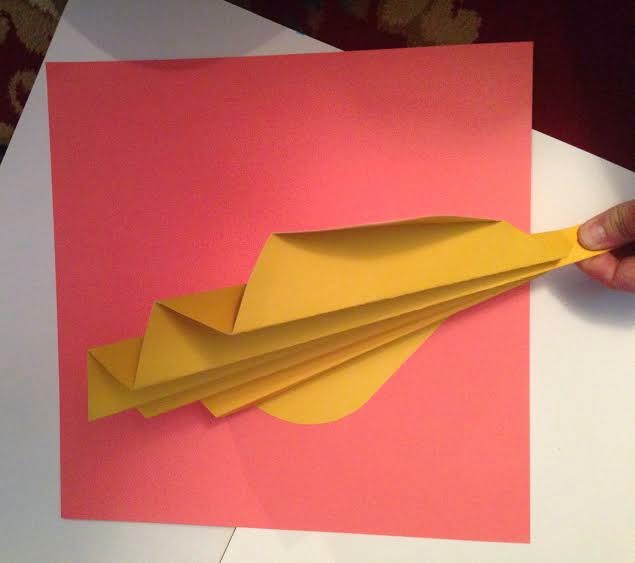 Here is a picture of the wing from the side.  You can see the pleats and how they ended up being placed on the paper. 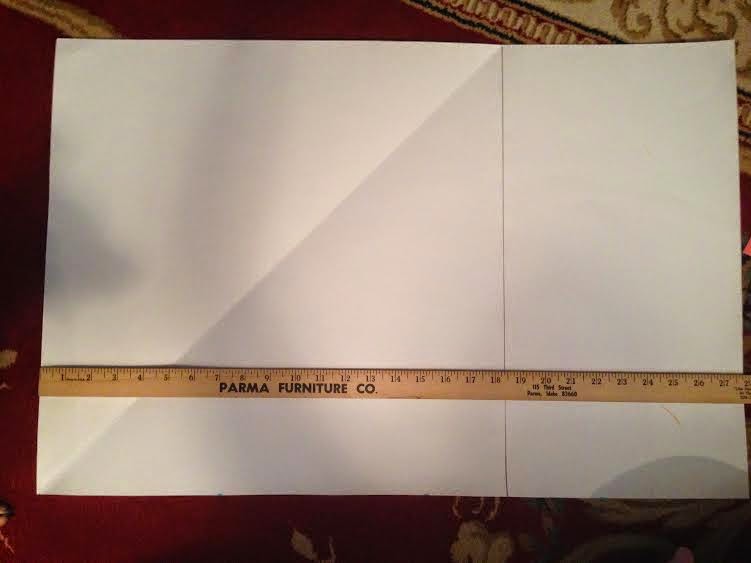 Now it was time to make the wings for real.  I had huge sheets of cardstock that I used...I placed a yardstick on it so you can see the size of the sheets.  I folded one edge on the diagonal to get the size of a square, and marked where the right side would be.  I trimmed that off.  Now I had a nice equal sided square.  The folding of the paper gave me the diagonal fold I would need to start the accordian pleats. 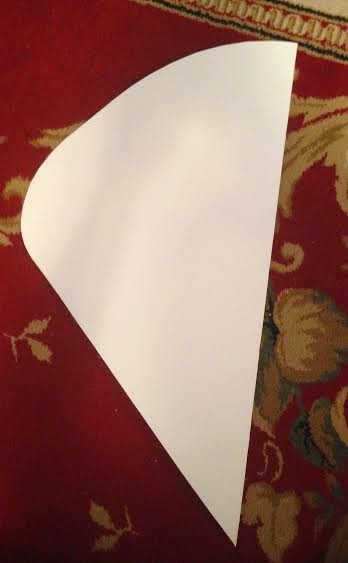 With the paper folded on the diagonal, I free hand drew the shape of the tip of the wing. 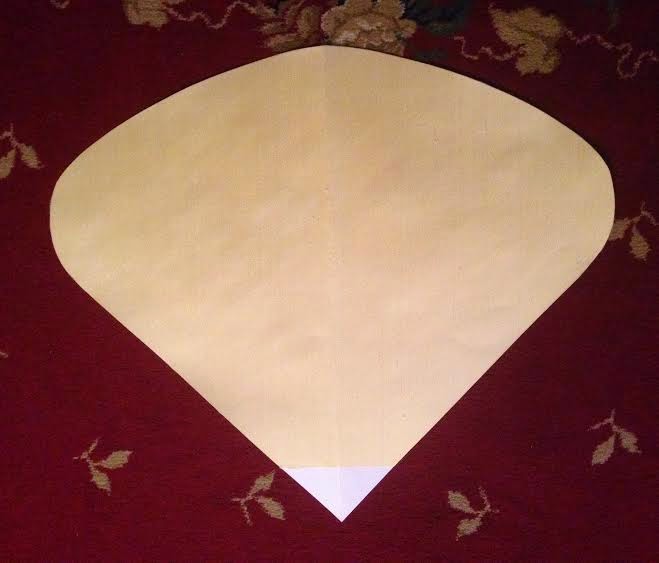 A) Ironed Under Wonder to the cardstock, making sure I didn't get any of the webbing on my ironing board
B) Trimmed the wonder under around the wing, then re-ironed to adhere the edges of the WU to the wing
C) Peeled the paper backing off the WU
D)  Ironed the silk to the paper
E)  Trimmed the silk to the size of the wing
F)  Repeated for the other size
It worked like a dream!! 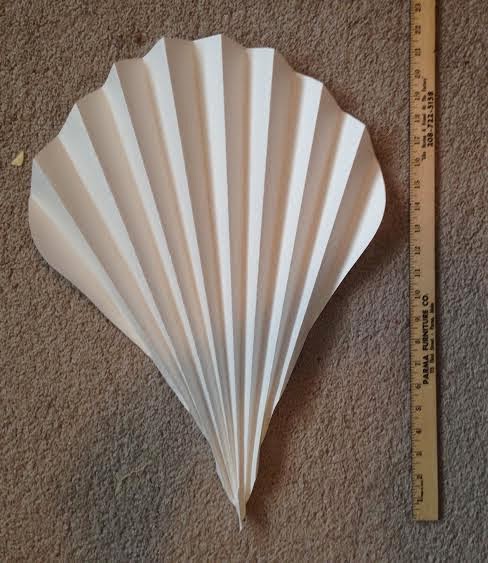 After the wing cooled, I used the accordian folding technique I did on the practice piece of paper on the real wings. 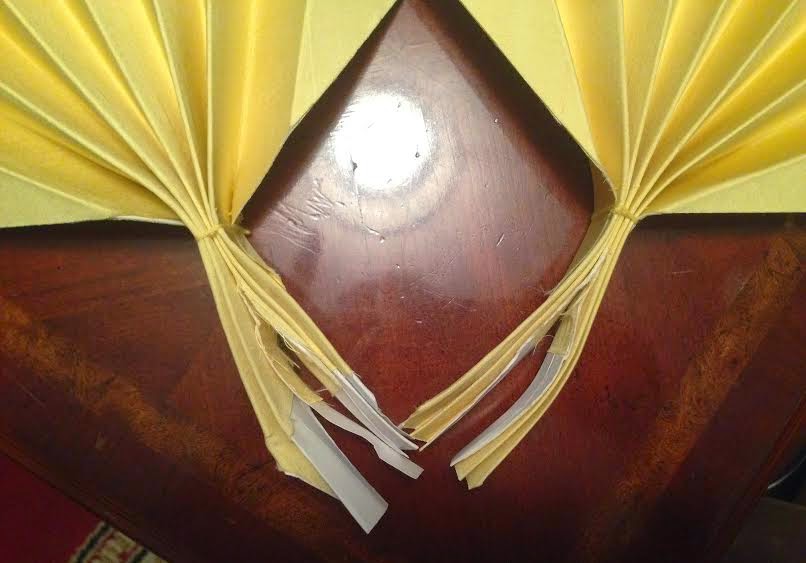 And here is where I forgot to take pictures.  I had to sew the wings at the base so that they would keep their shape, so I began pinching the base in differing places until I found where would make the wing look best.  It took me a while, but using tripled thread, a hefty needle and a thimble, I tacked down the base of the wings.

You can see in the image, that there are cuts in the wings below the stitch line.  I found the center fold was and cut up from there to the stitch line, making sure I did not cut the thread. 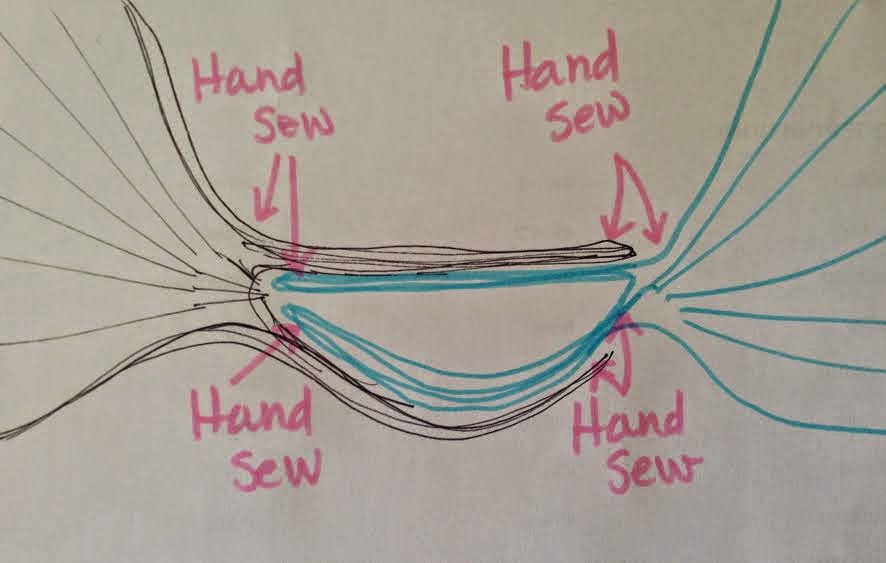 Now, because I didn't take a picture of this step, I made a diagram.  I hope it is clearer than mud!!  I knew that I would have to do something to keep the wings in a 45 degree angle because I didn't want them to be straight across.  I sandwiched the cut wing bases... the top layer of both wings I kept pretty much flat.  I stitched them to each other at the top.  Now the magic came when I bent the bottom pieces like in the picture...that made the wings tilt upwards!!!  It was such a weird thing for me to figure out but somehow I did...This is how my wings tilt up and are not straight across the back. 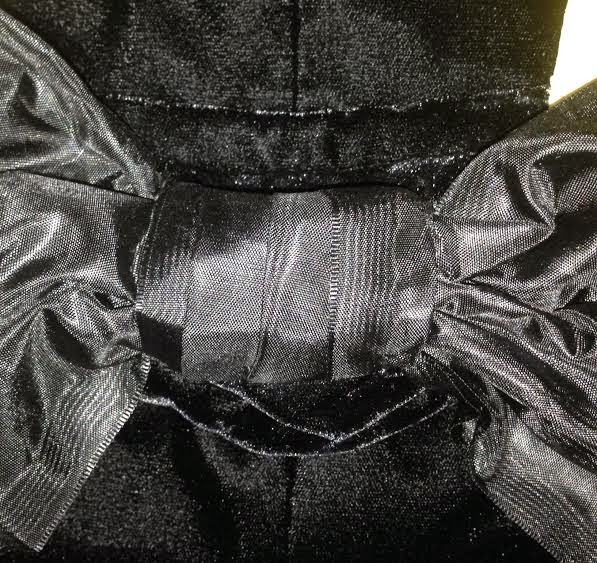 And again, I forgot to take a picture of the wings off the dress...but I think from now on it is pretty self explanatory...I simply covered the base of the wings with left over velvet from the dress, making sure to cover all the stitching threads.  I did use a piece of the boning I use for my bodices in the very top of the velvet casing to ensure the wing base wouldn't bend and buckle.  It is a nice added stabilizer for the wings. 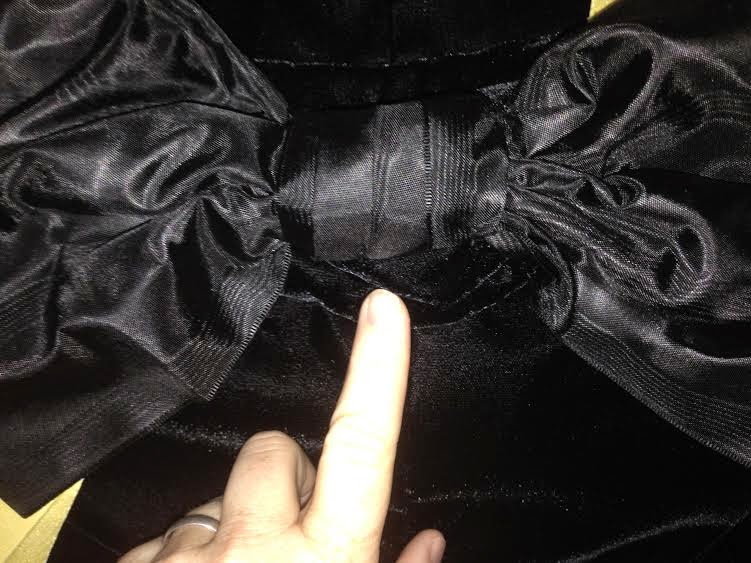 I did make sure that I hand stitched right up next to the cardstock all the way around the bases so that the wings wouldn't flop around inside the velvet.  You can see where my finger is pointing the very bottom of the bases. 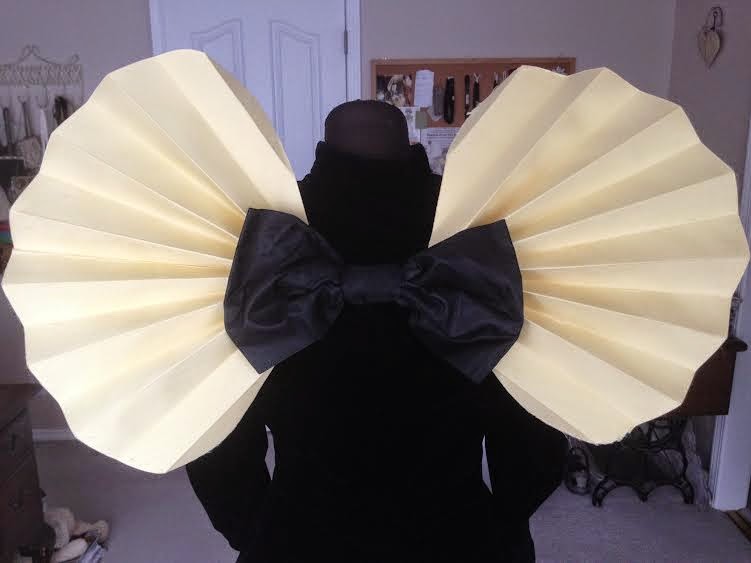 Aaaaaand because I was in a hurry, I failed to notice some of my yellow stitching could be seen from the back, I added this huge bow made from vintage moire ribbon...I think it looks much nicer than just the velvet casing!

I did use safety pins on the inside of the bodice to attach the wings to the bodice...there are three at the top and two at the bottom.  They stayed very securely in place and didn't wobble about at all! 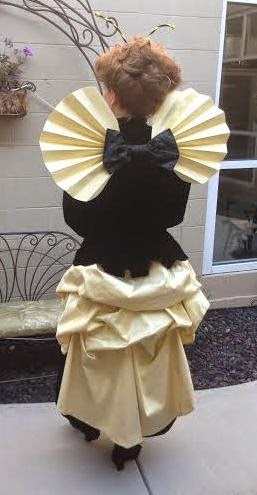 If any part of this tutorial did not make a lick of sense, please let me know and I shall do my best to make it clearer!

Blessings to you my friends!