Santa Claus Is Coming To Town!

Years and years ago...so many years that I can't even remember what year it was (I do know that it was after I had my first son...so that would make it after 1997...) I was looking through an issue of "Country Living" magazine and spotted some super fabulous hand carved Santas that were dressed in really neat-o outfits.  I instantly fell in love with them.  I thought, "Wouldn't it be neat to own one of those?"  Then my eyeballs just about popped out of my eye sockets!!  $2050.00!!!  Are you kidding me?  That's the price of a really nice used car!  After coaxing my eyebrown back down from my hair line, I decided that I could make some very neat Santas myself and I went about collecting things to do just that.  No, I did not hand carve and paint the faces and hands, I was a new mother after all.  I did however found some exceedingly cool porcelain Santa heads, hands and even boots.

I had to dig really deep to find these photos as they were taken so long ago.  I used thrifted fabrics, (mostly from old shirts), antique Christmas ornaments and decorations for Santa's gifts, horse bridles for the belts, sheeps wool for Santa's beard and hair, and rabbits fur for the fur on some of the trimming.

Mom wanted one of these and so last year I found some more Santa heads (they went out of production a few years ago...thank God for eBay!!!) and a Mrs. Washington head and hands and will be making her a Santa and Mrs. Clause for her this Christmas Season!!

Anyhoo, here are my previous Santas!!! 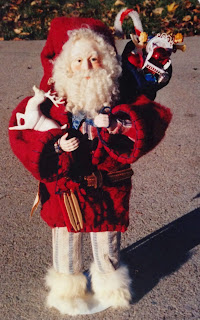 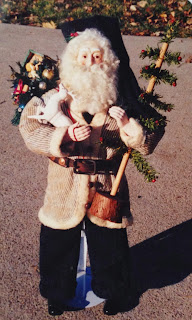 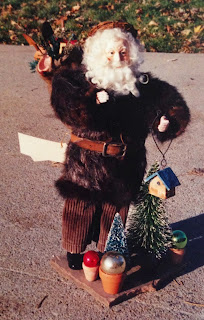 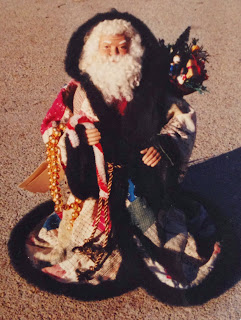 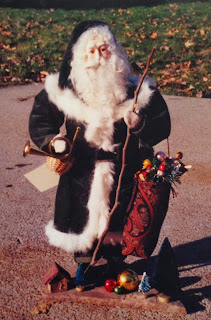 Victorian Santa...this one is my favorite one.  I think I will re-create him for myself!

In the following weeks, I will be photographing the steps I take in making these just in case any of my costuming friends wants to make one too!!!