I did it!  Yesterday I sewed for the first time since the day I tweeked my back!  Oh how delicious it felt!  I took it slow, used my comfortable folding/camp chair to sit in to sew at the sewing machine, did all the hand work on my comfy couch while watching Stargate the movie and Burn Notice season 6 with Cody.  It was so wonderful!  I had decided that I needed to get on with my life and if I moved with decided precision and calmness, I would be ok!  And you know what?  I am feeling good!

Anyhoo, I decided for my first project post back, I would start on my bonnet for my Damask Rose 1863 semi-sheer dress.  I fell in utter love with this example of an early 1860s hat on Pinterest which only showed the side view.  OHMYGOSH!  I loooooove the use of wire and lace and silk and tulle!  It is a beautiful confection!  And one that I believe would not only be easy to replicate, but light, airy, and cool-ish to wear in late September.  To my happiness, after clicking on the image on Pinterest, I was taken to Antique Victorian Clothing Blog where they also have a front image of the bonnet!  You can see the inside structure of the bonnet!  Huzzah!!!  Seeing only the side view one could think that the crown of the bonnet is buckram, but the front view shows it as being wire!

So, I set about to make it! 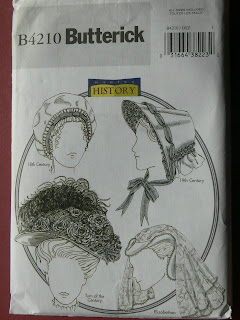 I used Butterick 4210 for the base of the pattern....I have made many wire frame hats and bonnets in the past and have been very happy with how they turned out.  For this bonnet however, I wanted a form that I could use for the shaping. 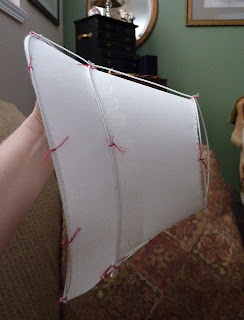 After the buckram frame was completed (I plan on using it for my 1863 mourning bonnet so it didn't go to waste...) I began by molding the main wires to the bonnet.  I had the brilliant idea of taking red thread and sewing the wires to the buckram so that the wires would stay put..these could be easily cut and removed when all the wiring was sewn together.  These main wires were what I would sew the rest of the wires to, to fill in the shape of the bonnet.  I used the same techniques on this bonnet as I do for the rest of my wire base hats.  You can find those techniques here:

Wire Frame Hat How To 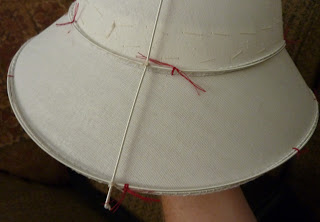 A shot of the "main" wires.  One around the brim of the hat, one around the base of the crown, and one going North and South over the crown to both sides of the brim.  After these were in place, I was then able to attach the rest of the wires. 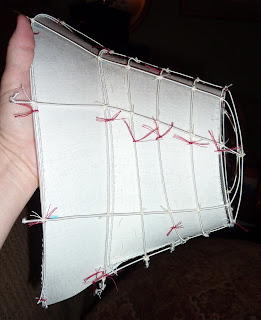 Yeah!! All the wires are measured and sewn together!! 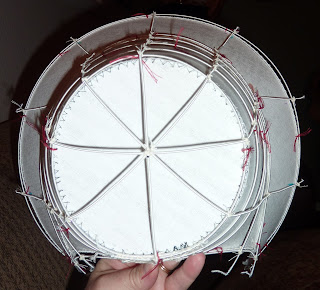 Instead of a flat crown, I really wanted a slightly domed crown. 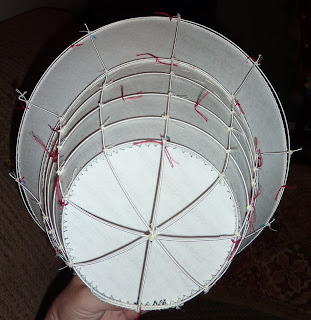 Oh how those little red thread anchors come in handy!!  Time to clip them off and set the wire base free! 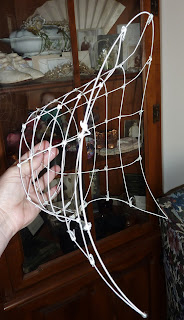 Ta-da!!!  The ends of the wires have been bent and folded under and my bonnet is now ready for its covering! 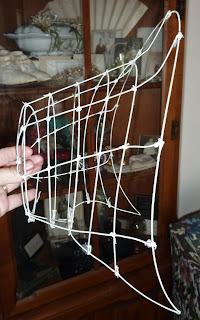 I bent the brim wired up ever so slightly to emulate the inspiration/extant bonnet. 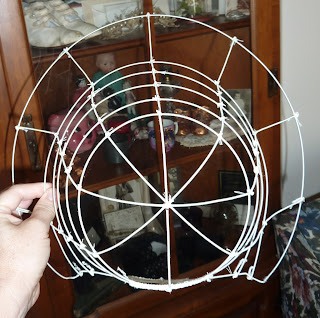 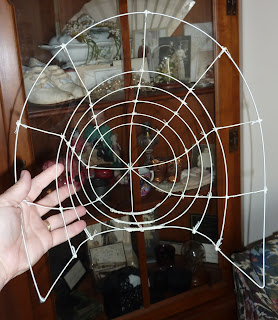 Today, I will be going to JoAnn's to purchase either some bridal white (don't want "blind myself" white) or ivory silk and start covering this!

I hope your Sunday is a great one!!