On Monday, March 4th, 2013, Idaho celebrated the 150th anniversary of being signed into a territory by President Abraham Lincoln and the Governor of Idaho, the Honorable Butch Otter held a Birthday Party for us!  It was held at noon at the Statehouse and may I just say that it was fabulous!!!!  The day was sunny and warm, the festivities were remarkable, the people were happy, the entire Idaho Legislature was in attendance, school children sang, American Indian Tribal Leaders from the Nez Perce and Shoshone nations were there, and of course I was finally able to wear my 1863 dress!!!

It was so very memorable, the whole experience.  The speeches were nicely said and I learned a lot more about the connection between this Idaho Territory, President Lincoln and the Civil War.  By signing the law that created the Idaho Territory, President Lincoln stopped any Westward expansion of the South and slavery during the Civil War and the gold and silver mined from our hills paid for weapons, ammunition and soldiers' salaries.  What a wonderful moment in time!

I am very proud of my Idaho and I love living here, and Monday just strengthened that pride in my home state!

Another fun thing about the day was that I finally got to wear my 1863 outfit!  After working on this baby for 1.5 months, it was finally able to be worn in public!!  I loved every  minute of it!  I could not believe how utterly comfortable this whole outfit was!  The only thing that I did not like was wearing the heeled boots...which is no surprise as I hate wearing heels of any kind. 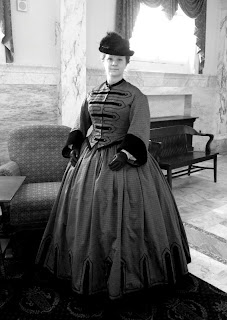 I played around with Picasa and attempted to make a daguerreotype....didn't work so well, but at least it is black and white! 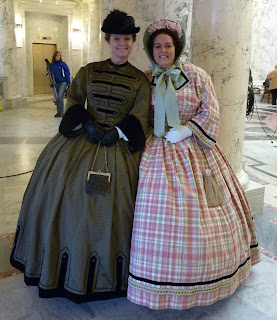 My wonderful friend Tammy and I inside the Capitol building.  We had so much fun on this day!! 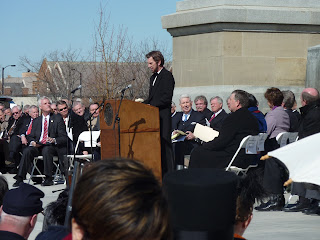 The "Oregon" President Lincoln.  He had written a speech in the manner and words that the real President Lincoln may have written if he had been addressing the crowd in Boise.  It was a really fabulous speech and it made me cry! 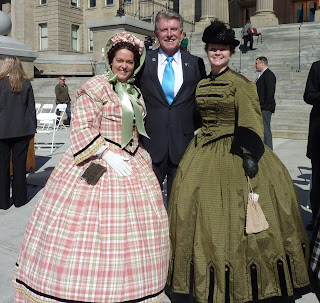 Tammy and I with the Governor of Idaho, the Honorable Butch Otter.  He was a really nice man with a lovely sense of humor.  He even danced a little bit with Tammy! 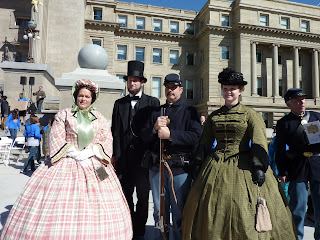 Tammy and I with the "Idaho" President Lincoln.  He is the president of the Idaho Civil War Volunteers re-enactment group. 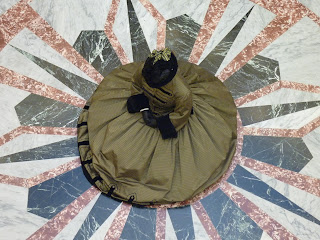 Sitting in the center star at the bottom center of the Statehouse.  There are three different types of marble in that star.  The red came from Georgia, the gray from Alaska, and the black came from Italy. 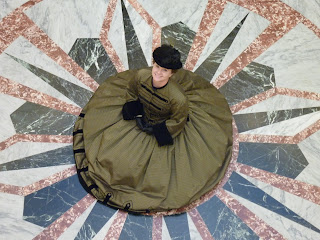 The first time I saw Katherine Coran-Greig (Koshka the Cat) sitting like this at Costume College I have wanted to do the same thing.  It just looks so cute and fun!  I had the though of doing this outside, but then Tammy did it in the very center of the star!  Well, that idea sounded better to me as the inside is dry and the grass would probably have been wet!! 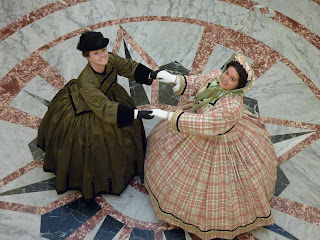 I wanted a pose that would look something like the ladies in the Victorian era would do.  They were so fun and cute! 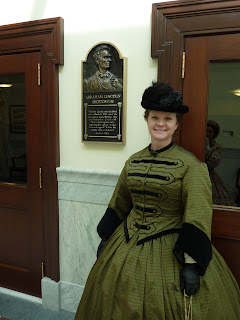 “Idaho was born out of political conflict, slavery, political disputes concerning Washington’s eastern boundary,” Senate Majority Leader Bart Davis told the Senate. “President Lincoln hoped that the creation of the Idaho Territory would serve as a further hedge against the spread of slavery and provide its ultimate abolition.”

The Senate voted unanimously in favor of the resolution. 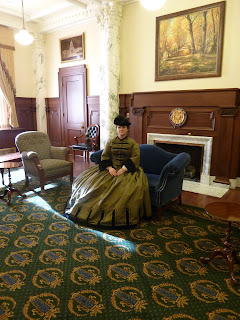 We got to have our pictures taken in the Governor's Ceremonial Office. 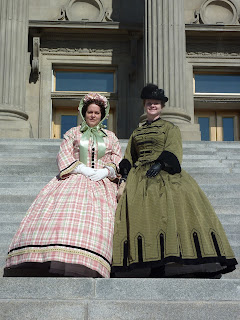 I love this picture of Tammy and me on the Capitol steps.  You can see our petticoats!!  How fun!