Squee!!  I get to make a Civil War era hat!!  Huzzah!  Yes, I said hat and not bonnet.  For the longest time, I was under the assumption that there were only bonnets worn in the 1860s American Civil War era.  Ha!  Not so!  Oh, I knew there were the funnily named "pork pie" hats that I had seen over the course of the "I will NEVER make a hoop skirt" course of my costuming life.  Those are really neat!  But...BUT!!!  Not until I got my dress completed and looked at with furrowed brow trying to envision the hat that would be worn with it did I start really rejecting the thought of a spoon bonnet.  Don't get me wrong.  I adore the 1860s bonnets and I will make one this year.  I even have the antique horse hair braid that will more than likely be used to construct it.  However, the look of my dress has a wee bit of a militaristic look to it; a more suit like, tailored feel that just wouldn't mesh well with the sweet, feminine look of the bonnet.  So, to research mode I went!  I found out that the 1860s offered oh so much more by way of head toppers than I would have ever imagined!  My milliner's heart leaped for joy!!  hahahahahaha!!!  Here are some of the images I found that support the hat vs bonnet argument that was warring inside my noggin! 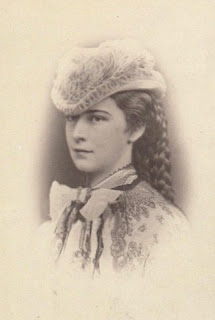 Empress Elisabeth of Austria, aka Sissi was exceedingly fashionable during her time.  And she stuck to a very strict exercise regimen .  Here she is in a lovely 1860s hat.... 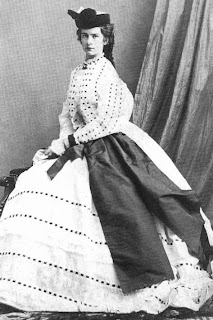 Love the look of this hat. 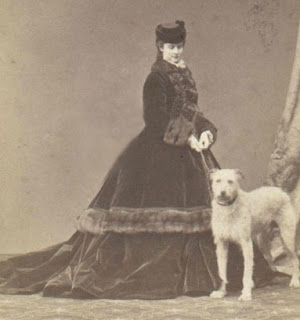 And again with a Wolfhound, dressed in furs and fabulous hat. 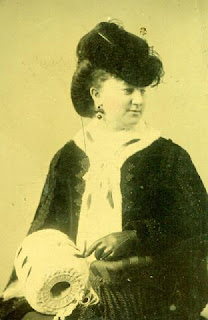 While researching, I came across this most fabulous website....and of course found these fabulous examples of hats from the 1860s....Love this lady's hat and ermine accessories!!  Laaaa!!

There are pages and pages of fabulous examples of hats and bonnets from many eras!! 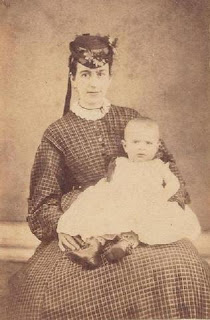 Another wonderful hat example from The Barrington House.

Email ThisBlogThis!Share to TwitterShare to FacebookShare to Pinterest
Labels: 1863, hat, Idaho Sesquicentennial, projects in the making