Right then, after your frame is complete, it is time to cover it.  But first things first.  There needs to be a sort of lining on which the main covering can be sewn to.  On my extant bonnets the lining was either a think buckram or a think cotton.  That is good and all, but for a couple of my hats I wanted to give the illusion of them being airy and ethereal.  After looking at examples from the MET and the LACMA, I decided that my lining should be several layers of tulle. 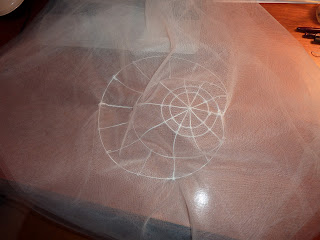 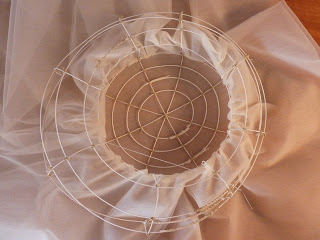 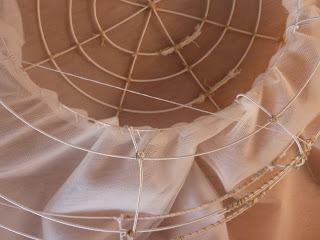 Here is a better picture of what I mean by "loose whip stitch".  Instead of a nice straight stitch, I get a diagonal stitch.  Again, it really does not matter if your stitches are perfect.  It will be covered! 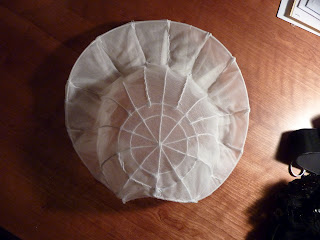 After the tulle is attached to the bottom of the crown, it is time to stitch the tulle to the edge of the brim.  Again, use the whip stitch. 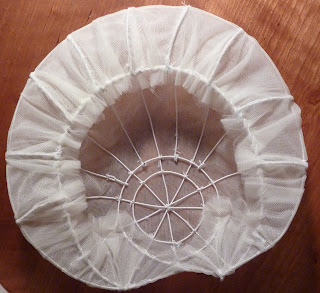 Flip your hat or bonnet over and smooth the tulle back to where the crown and brim meet.  This time stitch the tulle to the under side of that same juncture. 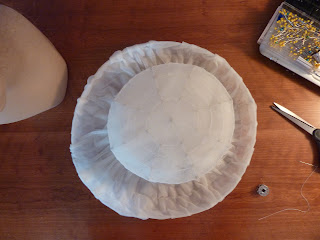 Top of Mom's 1903 toque.  Notice how the tulle has now nicely covered all the area!  It is not a super tight fit but not super loose either.  Just a lovely covering. 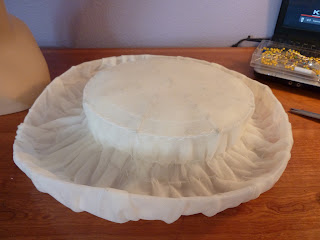 You can see the wires through the tulle here.  I would like to point out that then making this sort of hat where the brim is not straight out from the crown, but rather arcs out from the crown, you need to be very careful with how you treat the tulle.  You don't want the tulle to stretch strait across the top of the brim, but rather sweep down into the "cradle" of the brim.  I just gently poke it down and keep that in mind as I sew the tulle to the edge of the brim.

For 3 of my other hats, I used a double layer of flannel instead of the tulle as the fashion fabric was not see through and airy.  It was velvet, silk and taffeta.  I wanted a tighter appearance on those hats and the flannel did a lovely job of smoothing out the wire lines.  I did however follow the same steps for sewing the flannel on that I did the tulle.

Next stop?  Finally it shall be covered with loveliness!!!

Email ThisBlogThis!Share to TwitterShare to FacebookShare to Pinterest
Labels: Do it Yourself, hat, tutorial, Wire frame hat