The closures on the fabulous wool suit are really neat-o frogs.  I want to keep to the spirit of this outfit as closely as I can, so I need the frogs to be in the same color scheme as the rest of the suit.  Looking at the frogs in the picture and letting my mind ruminate on how I would go about making the frogs, I came up with an idea!! 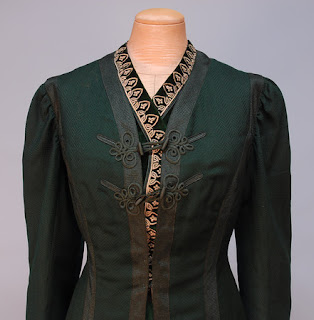 Frogs on the original suit.  I love these!  They are really neat...except the straight pieces sticking out to the sides of them.... 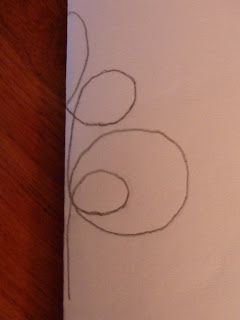 To start things off, I folded a piece of paper in half and copied half the design. 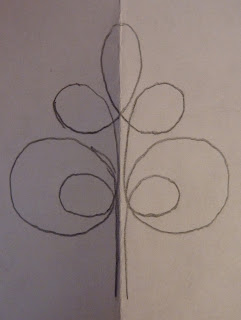 Flipping the paper over, I traced the half design to make a whole design.  This way, my design would be relatively equal on both sides. 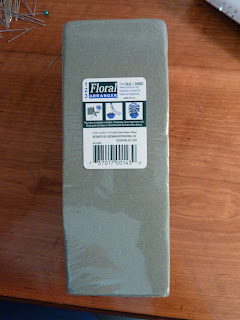 I have had this piece of florists Styrofoam laying around forever, and I totally found a use for it!!! 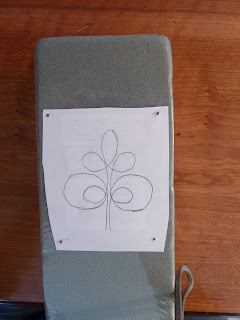 After pinning the design to the foam, I began arranging the soutache. 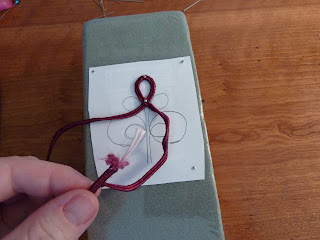 After fiddling with the soutache for a while and not being happy with the outcome...it kept twisting and turning on me...I looked up on line how to work with soutache, and found this from "Threads Magazine"...

Ohmygosh!!  This technique totally made the soutache workable!!  I was so excited, and nobody was at home to share my excitement with me!

I folded the soutache in half, found the center and began working at the top of the design. 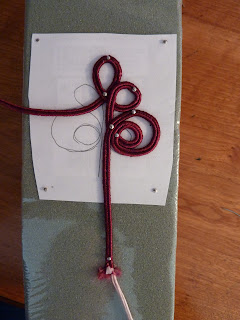 I first did one side of the design, pinning at various points as I went... 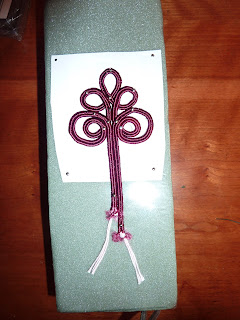 Then arranged the other side. 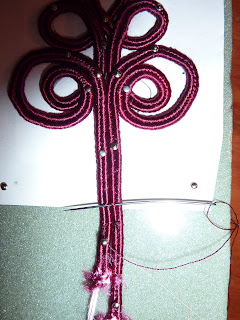 Now it was time to sew the frog together.  I had noticed on the back side of frogs that there is an over abundance of stitching.  All the better to hold the frog together!  Everywhere the soutache met, I whip stitched the pieces together. 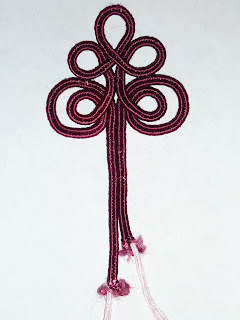 After the sewing was complete, I unpinned the frog from the foam and flipped it over...WOW!!  It worked!!! 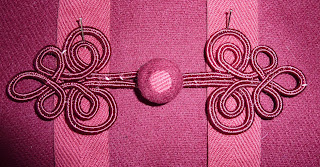 After making a loop on one side, I sewed a button on the other side!  Voila!  A custom dyed frog!  Sweet!

Email ThisBlogThis!Share to TwitterShare to FacebookShare to Pinterest
Labels: Do it Yourself, Merlot Wool Suit, tutorial