Once upon a time, not so long ago, there were wonderful plans for the beginning of this 2016 year.  An elliptical 1860s hoop to be covered with a raspberry silk dress.  Lots of new and fun vintage era dresses...  But those plans were put on the back burner with the call from a friend in December asking me to do the costuming for the Spring Musical at NNU.  (I am so very excited about this by the way!!!)  All personal sewing will have to be taken back up in the middle of March, so until then, I will be re-instating Throw Back Thursday posts highlighting sewing projects that were made and completed before I started Beauty from Ashes!!

Around 5 years ago I believe... I was at JoAnn's and came across a bolt of this most delicious pale, pale pink silk.  It was on sale for $8.00 a yard and I took the bolt up to the cutting counter to get 3 yards cut.  I was shocked to the very tip of my toes and my eyebrows rose to my hair line when the lady attending me informed me that the silk (oh, did I mention that it was also 58" wide?) was a mere $2.00 a yard.  TWO DOLLARS A YARD!!!!!!!  After recovering from my utter shock, I informed the lady cutting my fabric that I would take ALL the silk.  14 yards later, I walked out of JoAnn's with a most ridiculous grin on my face.  I think I was walking on clouds!!

I took my frothy bunch of girly, pale pink silk home, and as I sat petting it and talking lovingly to it an idea came to me.  I had enough silk sitting on my bed to make dresses for my three nieces and myself!  What fun!!

My nieces' names are Gracie, Lizzie, Hallie and I am Auntie to them.  When we are all together, we are the "ie" girls!  As I sat petting the silk, the idea of making dresses for a Victorian Picnic kept playing through my mind, hence the names of these dresses "The ie Picnic Dresses".  Wouldn't it be so fun to take the girls to the Idaho Botanical Gardens, with hampers full of food, fine china plates and crystal goblets, sitting on antique quilts spread on the grass among the spring flowers!?  Well...the picnic didn't happen, but the dresses did get made.  We ended up going to Miss Tammy's Tea House and had a delicious brunch (I had a Monte Cristo!!)  It was a fabulous oh-so girly day!!

We all met at Mom's house to get dressed for our Victorian day and for our photo shoot. Aren't my girls beautiful???
This was 5 years ago, and it is so fun to see how little they were! 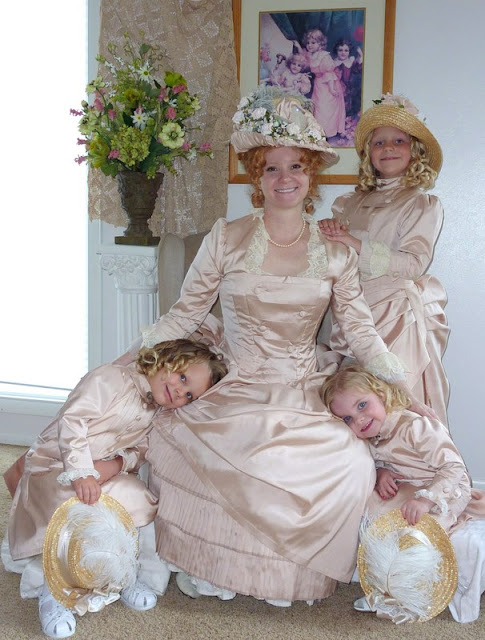 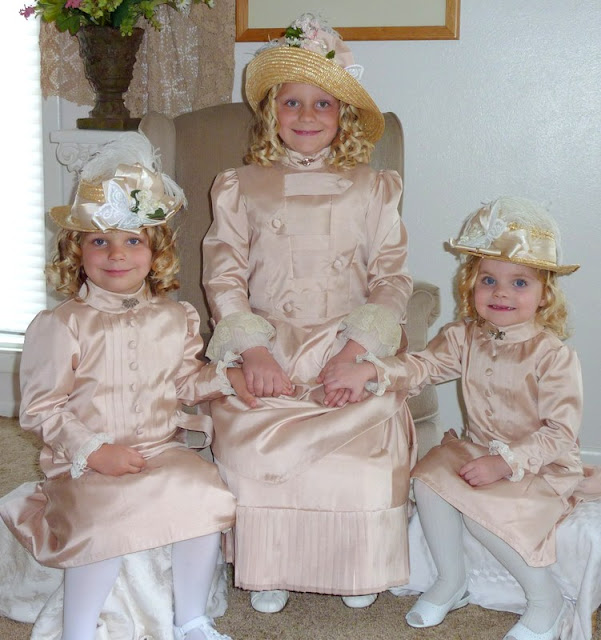 God didn't give me girls of my own, but He did give me these sweet little ladies!  I added butterflies to their hats to echo the one in mine. 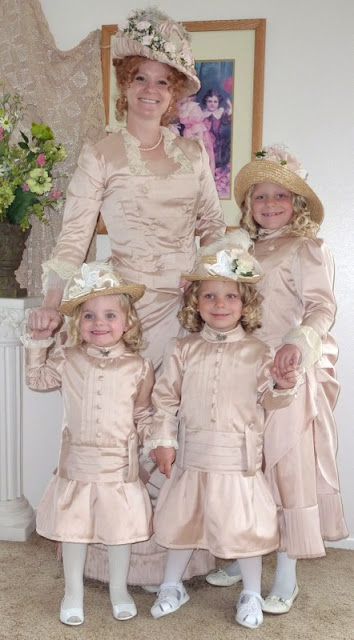 At Miss Tammy's Tea House.  It was fun to watch their reactions as people gushed over them.  It truly delighted them!

Not only did I make their dresses, I made them the underwear to wear under the dresses!  The little girls got drawers and a ruffled chemise.  Gracie got drawers, a chemise, petticoat, corset, corset cover and a bustle pad!  (This was the biggest project I have ever undertaken!) 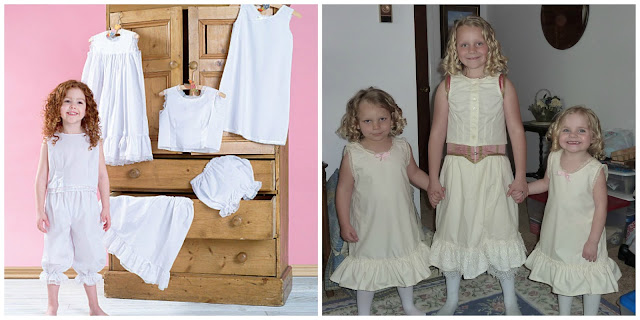 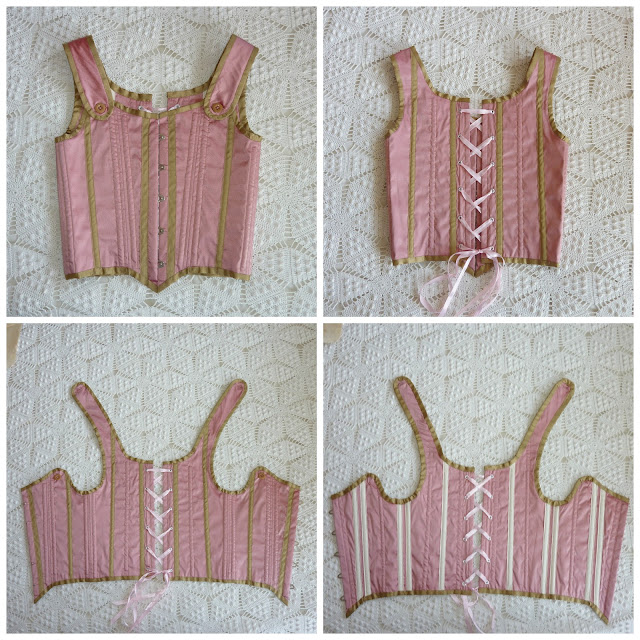 I patterned Gracie's corset after extant ones I had seen online.  This was in the days before Pinterest.  I can't remember where I found the inspiration, but I have started a Pinterest board of Young ladies' underthings.  I used an old busk instead of buttons for the front, and as little girls' bodies are more or less the shape of sausages, I made the straps so that it would stay on her body!  It is made of pink and brown silk, because I wanted it to be pretty!

For the little girls' dresses, I found this image from 1883.  I knew it would be perfect for my girls!    They were so adorable in their little Victorian dresses! 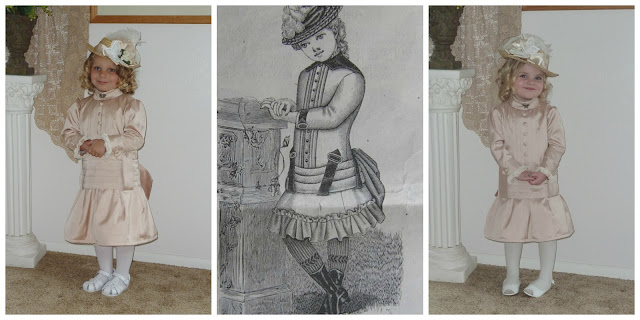 I had found an image of a fabulous NFE dress some time before the finding of the silk and had been saving it for a very special fabric.  This fabric just screamed to be made into the inspiration image, so that is what happened.  Plus....tabs!!!  And buttons!!  But tabs with buttons?  I felt as though I had died and gone to costuming heaven!  I decided to make Gracie's dress as a smaller version of mine as that is what often times happened in the Victorian Era. 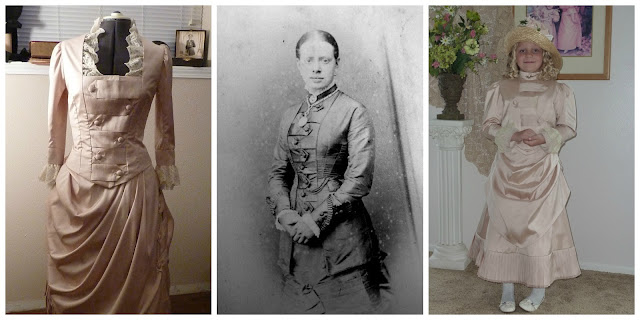 I can't find the inspiration image for the skirt of my dress, but it also had the tabs and buttons theme of the bodice.  Also, all the crazy tiers of the pleats!!  Pleats, tabs, buttons....my ultimate weaknesses! 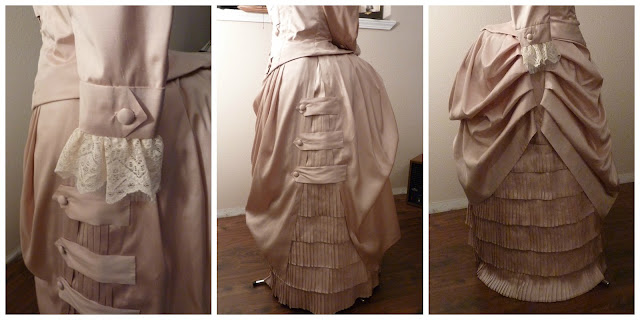 On a trip from one of the Carolinas to Tennessee with my fabulous friend Josie, we stopped into one of the mega antique malls that dots the south.  In it I discovered this incredible butterfly made from feathers.  It had been in my stash for several years just waiting for the perfect hat to adorn.  Well, as you can guess, this became the perfect hat!  Since the dress was to be worn in a garden, I decided to cover it with flowers for the butterfly to perch on!  I have since sold the hat to a lovely friend of mine...but I do miss that hat! 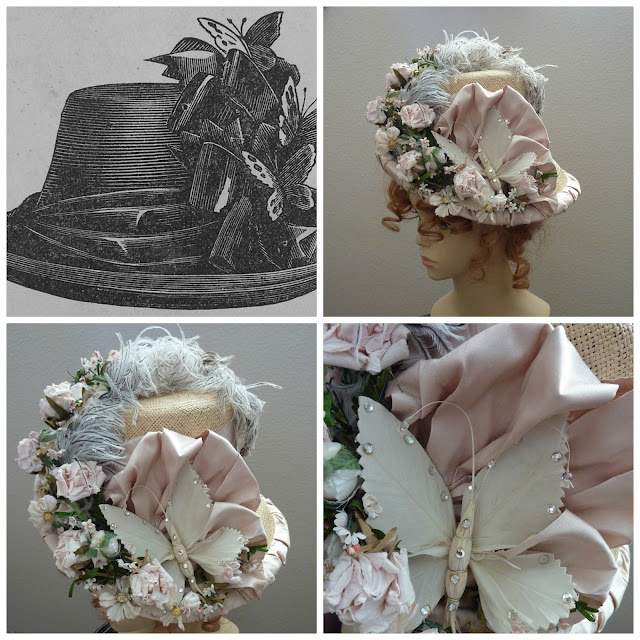 It was fun watching my nieces in their dresses.  Their very nature and way of being changed while wearing them.  One of my nieces is rather a Tomboy, but when she was wearing her dress, she turned into quite the little lady!  They carefully put their gloves on and were careful to place their seat belts so as to not crush the silk.  At the restaurant they placed their napkins on their laps and didn't want to soil their dresses.  (I quickly assured them that if they did get something on the dresses it was totally ok and that we could just wash them!) For an afternoon, they were transported back in time and it was a fun transformation to watch!

Be Blessed my friends!