Right then!  Last weekend was super busy.  My Mother-in-law was in town and on Sunday, I became the mother of an 18 year old!  That's right, my oldest son turned 18!!  I cannot believe I am the mother of an "adult".  I am not that old!!!

I returned to sewing after all was back in order.  I started and finished a quilted petticoat and starched and ironed the corded petticoat I had finished last week.

I have wanted to make a quilted petticoat for quite while.  I have made do with my "cheat" one, the one made out of a quilted curtain.  It's the one I use for my 1830s and my 1860s.  I have a Pinterest page dedicated to Quilted Petticoats and while perusing it one day, I found the one that I could totally do!!  It is a lovely ivory confection with a wave, "eye", swirly, diamond design going on!  I figured that I could easily make it.  I decided to make it using the sewing machine as I have no time at all whatsoever to do anything hand sewn.

I am super happy with how it turned out!! 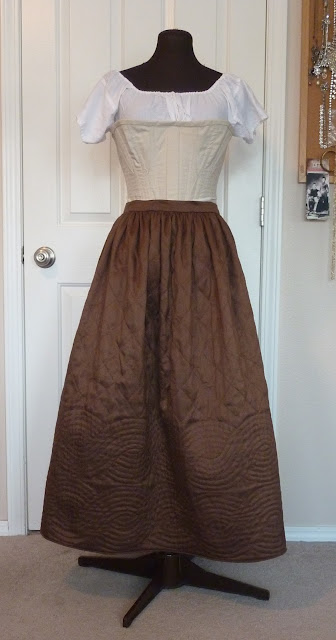 This petticoat is so luscious.  I truly love the color but badly wanted to use stuff from my stash, and all of my ivory silk is earmarked for other things! 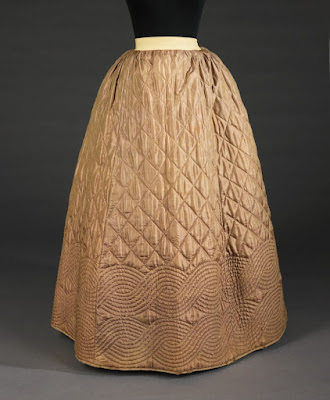 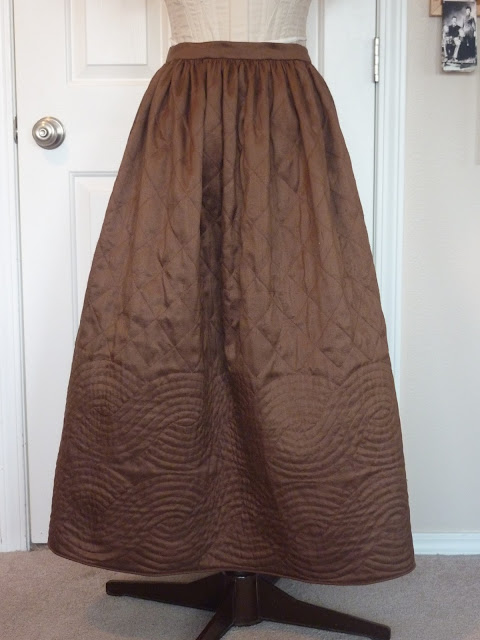 For some reason the silk did not photograph well.  It is super lovely...sort of a dark chocolate with a touch of cinnamon! 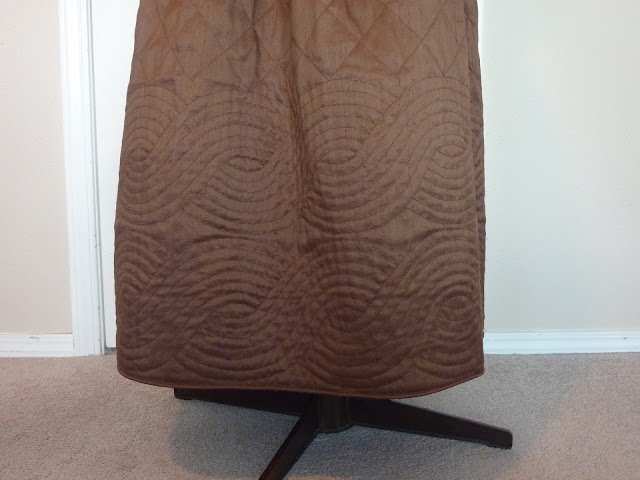 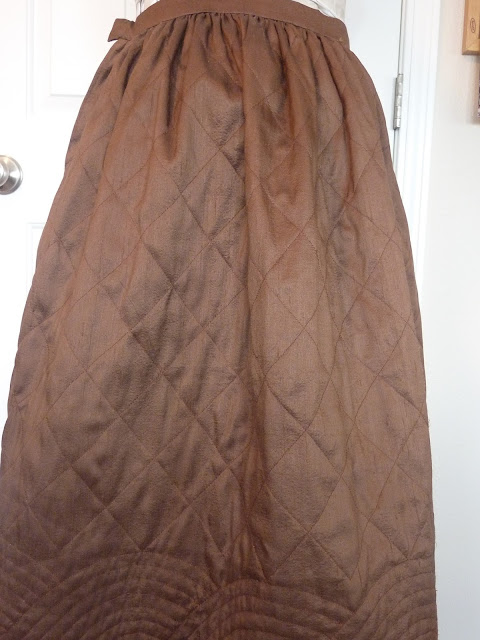 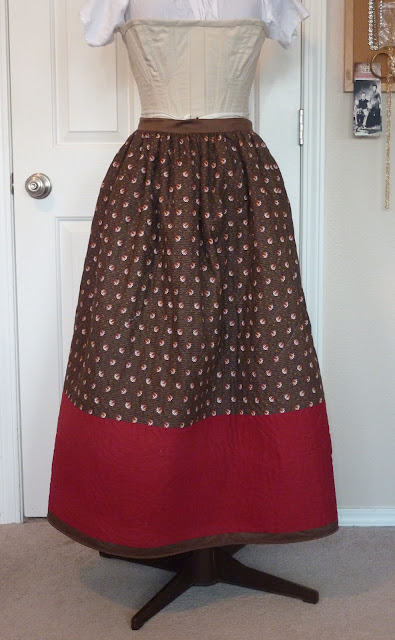 For the inside, I chose a fabric that I found at Walmart a while ago.  It is a cotton and reminds me of a quite a few of the cotton prints that I have seen dresses from the 1840s and 1850s made of!  Huzzah!!! 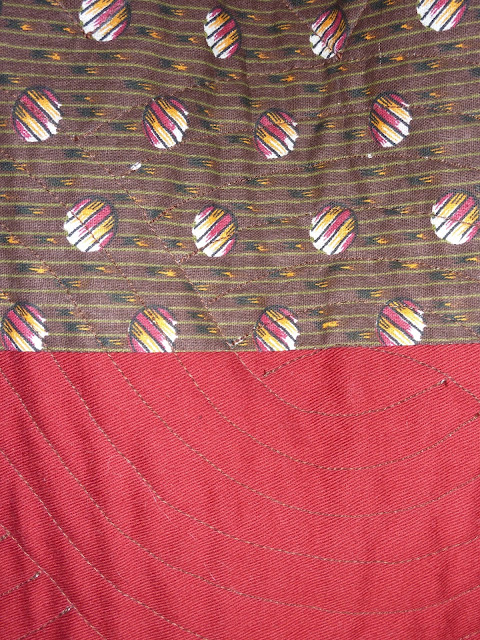 The circumference of the petticoat is 86".  I decided that the "eye" of the designs should be 6" apart and that's how I made the pattern.  I soooooo did not feel like tracing the pattern out with a chalk pencil, knowing that I would have to reapply it constantly, so I pulled a trick from my Great-Grandma Cornelia's book.  When she used to quilt, sometimes she would use catalog paper to use as patterns and then just sewed the paper, along with the fabric together, later removing the paper! Genius!!!  I made the final design by tracing the swirly eyes onto computer paper that was taped together in a long strip.  I had thought about using either tissue paper of newspaper print, but I am so glad I didn't.  The computer paper held up quite nicely to the moving and bending and folding that I needed to do to get the lines sewn. 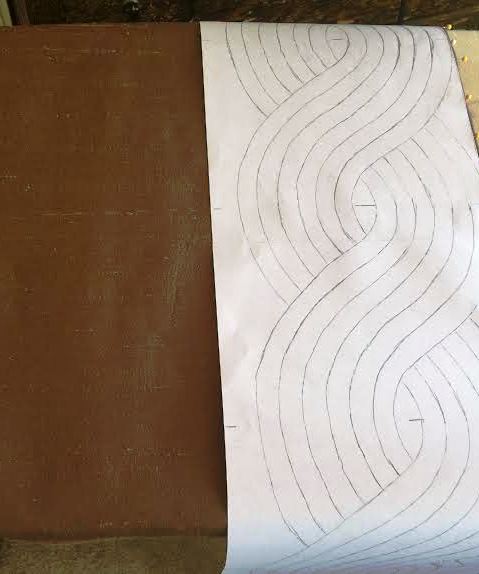 At the very bottom of the petti, I sewed in one line of the larger cording I had used in the corded petticoat.  Then I placed the pattern above that. 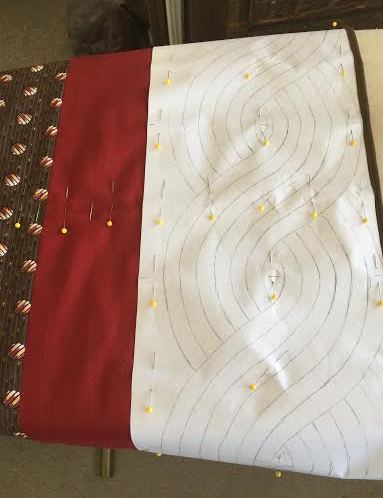 Let the pinning begin!!!  I actually added waaaaaay more pins that what is shown here.  I didn't want the pattern or the three layers slipping around.  For padding, I used 100% cotton flannel.  I also chose to sew from the back of the petti, as it caused the front to have the quilted look.  When I sewed from the front, it was "flat" looking and not quilted looking. 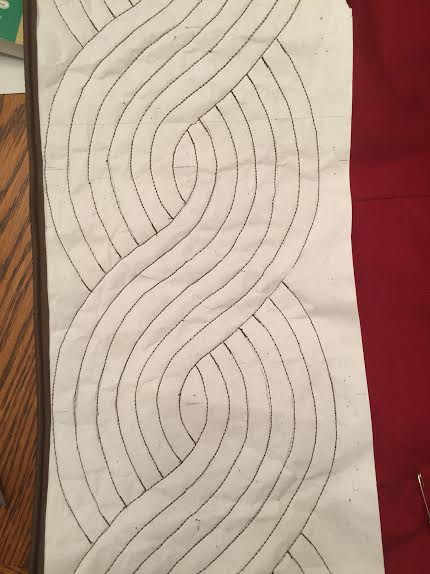 Ta Da!  First row of wavey eyes done!!  Grandma Cornelia sure knew what she was doing! 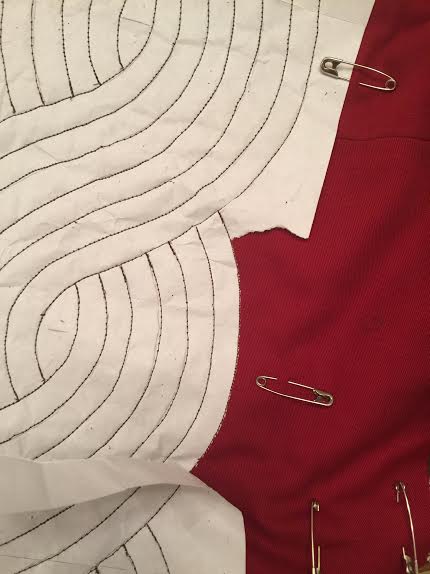 Nest step...just start tearing off paper!  It was actually quite easy, as the needle acted to perforate! 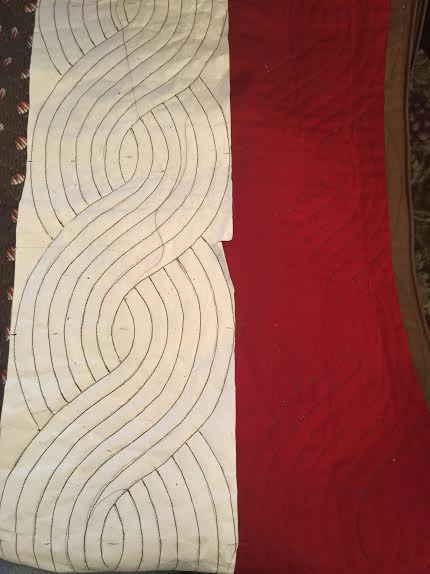 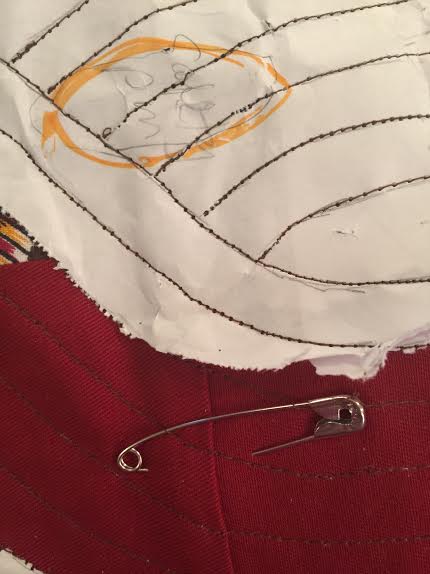 I did have a bit of trouble here.  I decided to safety pin where the flannel ends met so they wouldn't shift and totally forgot to remove the pins before pinning the pattern paper to the petti!!!  Two safety pins destroyed..... 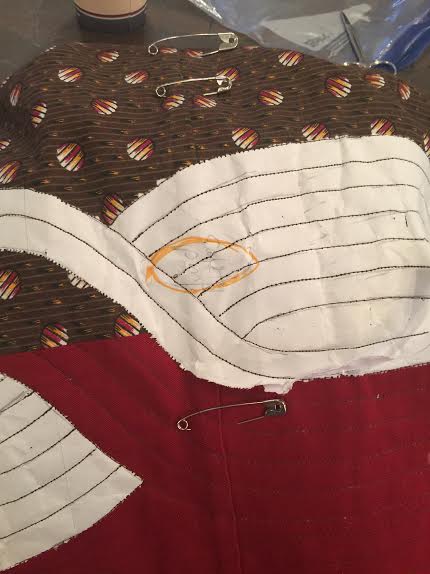 Another shot of the tearing off of the paper pattern!!  I used tweezers to remove any left over paper.

I made a corded petticoat to go with all of my 1830s dresses using Sugar and Cream crochet thread, but I wanted a corded petti that would give my 1840s skirts the correct bell shape.  For this one I used a thicker string.  I can't remember the width as I am number challenged.... 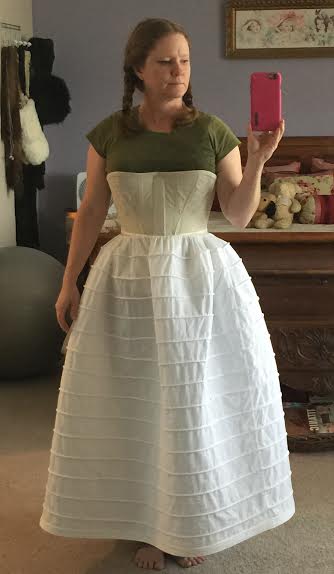 Petti before being starched. 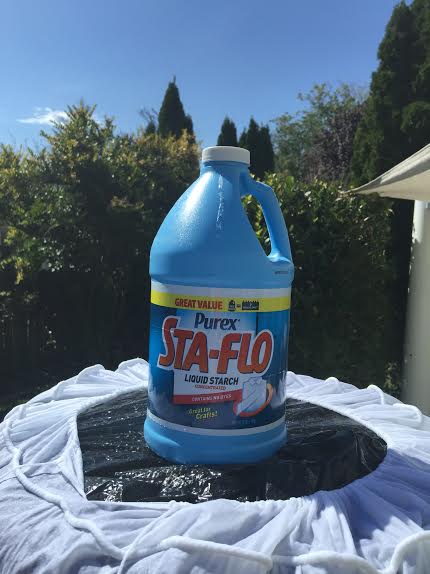 The brand that is available at my local store. 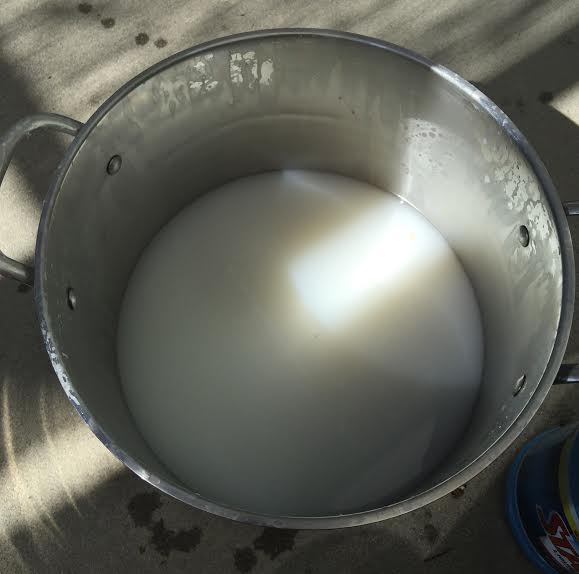 I actually make up the starch in a non reactive metal pot!  Works perfectly! 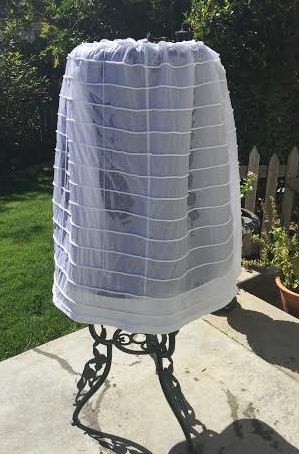 After soaking the petti in the starch, I drape it over a large trash can covered with a large black trash bag.  For this one, because it has a draw string closure, I had to lift it off the ground on one of my patio tables. 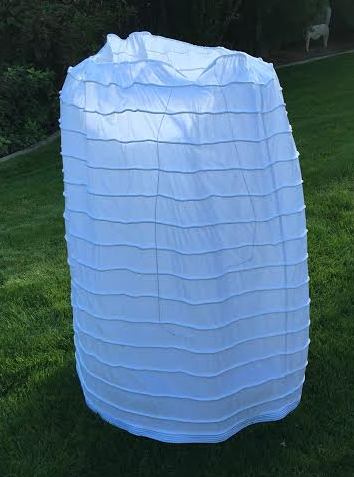 After the petti has dried, it can quite literally stand by itself!  Crazy!!! 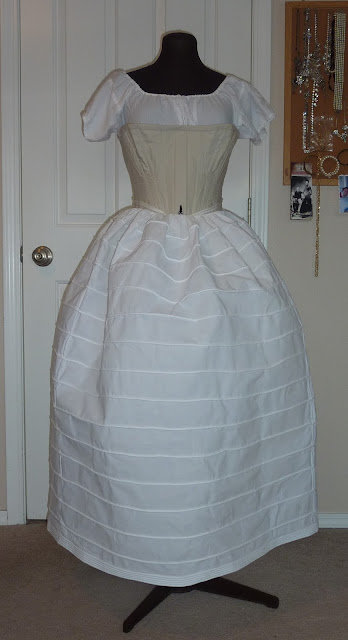 I was sort of freaking out at the insane bell shape of the thing!  I tried it on and after laughing myself hoarse, I just didn't know what to think of it.  So, I put one of my 1830s plain pettis over it.... 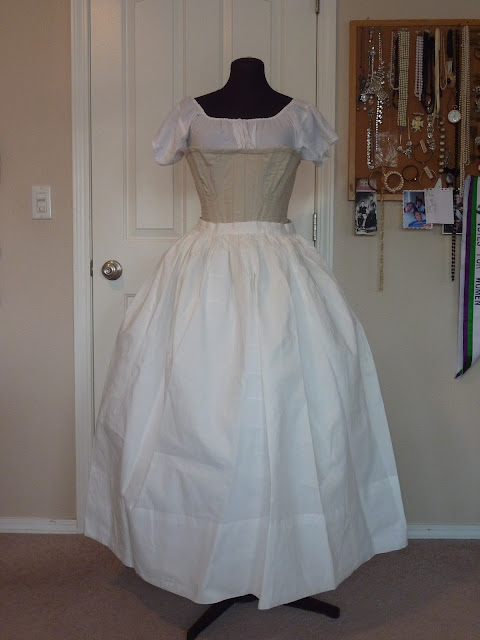 Ok, this is much better and doesn't look so ridiculous!!  I may or may not make a couple of new plain pettis...We'll have to see how much time I have left over!!! 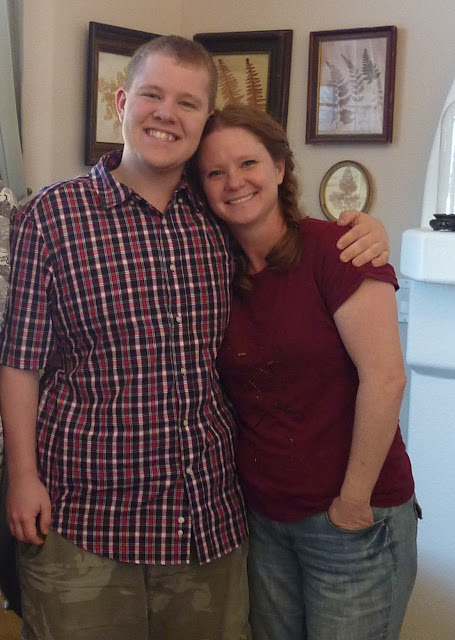 Be blessed my friends and I hope your weekend is tremendous!!