Finally, after weeks of sewing, I can put my sewing machine and accouterments away.  The mad rush to finish all the things I had planned for the upcoming Fashion Show at Something Special Antiques next Saturday is over.  I still have to do some fiddly bits on the Grape Soda Dress, but I don't really "count" that as I can do that stuff downstairs while watching TV with my family.  So, to my way of thinking, the sewing is over!!  I was going to make a yellow 19teens corset to go with this outfit, but after I sewed the panels together, I discovered that the waist to waaaaay too small.  I did something I never do and that is, I did not make a mock.  I know.  I can't believe I did that either!  Crazy talk!!  But I was in a hurry and wanting to get things done before next Tuesday.  School starts for Colton and me, and I want to focus only on that while we work out the world of homeschooling without a Co-op.

I have to just tell you that I am so in love with the pattern that Lauren of Wearing History put out!! The 1910s Suit Jacket is FAAAAAABULOUS!!!!  I didn't have any issues with it and it went together so very smoothly.  The only seam ripping I did was after I followed a tutorial incorrectly, and that was my fault.  I did have to follow this tutorial on doing the collar, as I am so very not a read-it-and-understand-it type of gal.  I am an I-need-to-see-big-bold-pictures kind of gal.  After reading the tutorial and looking at the wonderful images, I was able to get back on track!  I am so loving this jacket that I seriously want to wear it with my jeans this winter!!  I made it from the scarlet wool that I found at a local thrift store years ago.  I had planned on making the Kyoto Museum's Regency era redingote, but after much deliberation decided to go with something I would actually wear more often in Idaho.  I had some striped ivory and black cotton jacquard fabric in my stash that I had also picked up at a thrift store and thought that would look great as the skirt.  I am sad to admit that I cheated on the blouse.  Like I said above, I was running out of time to get this ensemble completed and so searched the thrift stores for a white blouse with a suitable 1916 collar, or one that would pass for one until I can make one.  It will do! 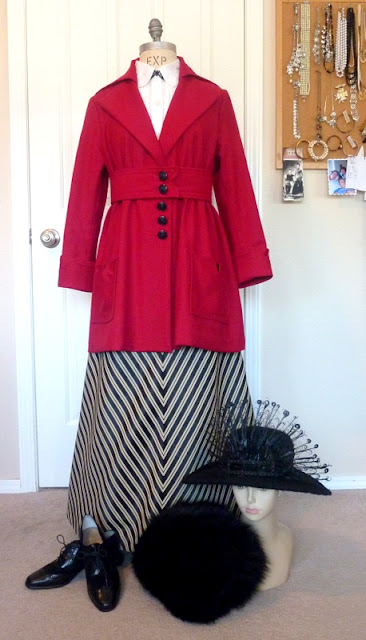 Completed outfit!!  It is so simple and tailored that it makes me smile!!  Totally opposite to the Grape Soda Dress.  The whole thing didn't take even a 6th of the time it took to complete the GSD!!!

Inspiration for the skirt.  I LOVED the chevron skirt and so wanted to use that for my outfit.  I did have some troubles with it as I decided that the jacquard was very thick and didn't need to be flat lined.  Boy was I ever wrong!!  I had it all sewn together and ready to sew on the waist band and discovered that it was hanging weirdly.  I slept on it and decided that I would take it apart and flat line it with a poly taffeta I had in my stash.  Sure enough, the weird hanging that was going on was gone.  Lesson learned!!!  Ugh!  Oh, I was able to use the almost 100 year old pattern a very dear friend of mine named Hilda gifted me with! 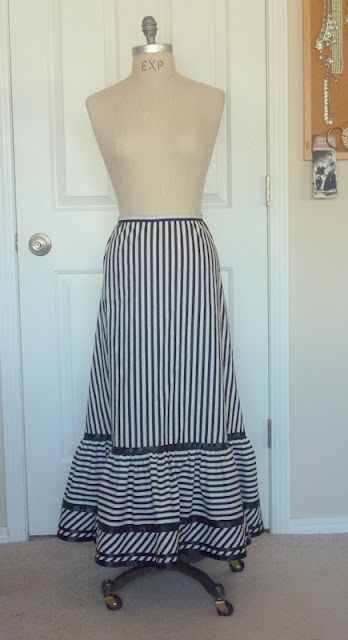 I did need to make a new petticoat to go with this shorter dress.  Darn it.  I so hate making underwear.

AAAAAAAAHAHAHAHAHAHAHAH!!!  Just kidding!  I adore making underwear and this was no exception!!  I had purchased some striped cotton fabric years ago in the hopes that it would become an Edwardian petticoat.  Sadly, I didn't buy enough and the quilt store where I got it didn't carry it any more.  What to do........  Make a 1916 petti!!!  Huzzah! 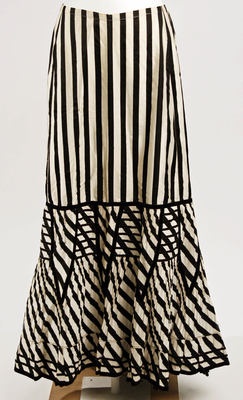 I just love black and white Edwardian petticoats and was thrilled at the thought of making one for myself!!  I used satin ribbon for the accents on mine. 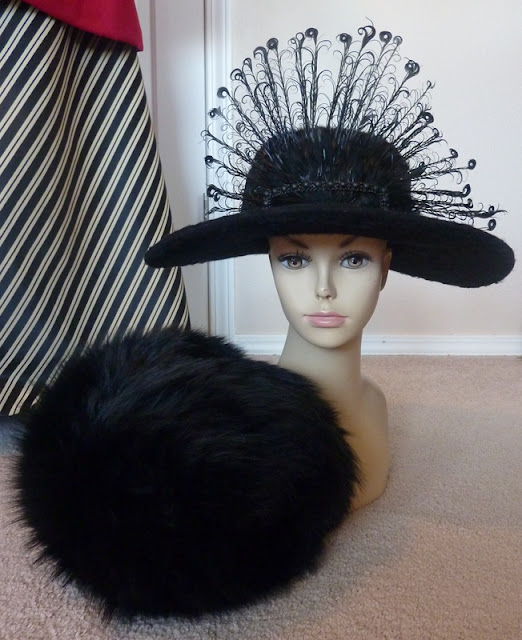 For the hat, I had to shorten the brim on a antique fur hat that I have had for a while.  I feel a little bad about defacing an antique, but the tall brim just wouldn't do for the 1916s.  I shortened it about a inch, re-attached the silk ribbon and added a composite feather do-hickey and a jet buckle.

Inspiration for my hat.  I only learned after I got the hat completed that this advertisement was from 1920!!!!!  Oh well.  I like the hat and don't plan on changing it.  The curly feathers are so fabulous! 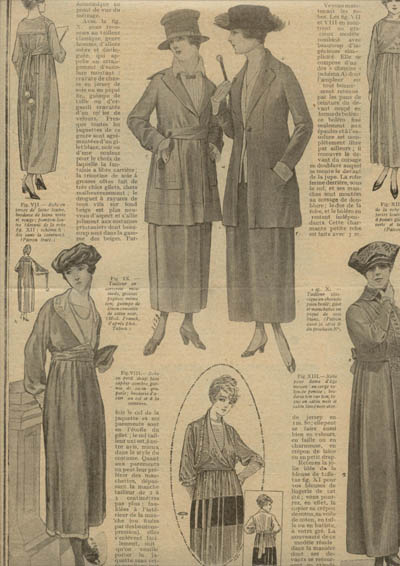 I was having issues with the fact that my blouse needs to be buttoned to the top and not lay open like so many of the blouses from this era.  I searched Pinterest looking for justification for wearing a brooch at the base of the neck and came across this image.  I believe this catalog page is from 1919, but until I can make a new blouse, the brooch at the collar will have to do! 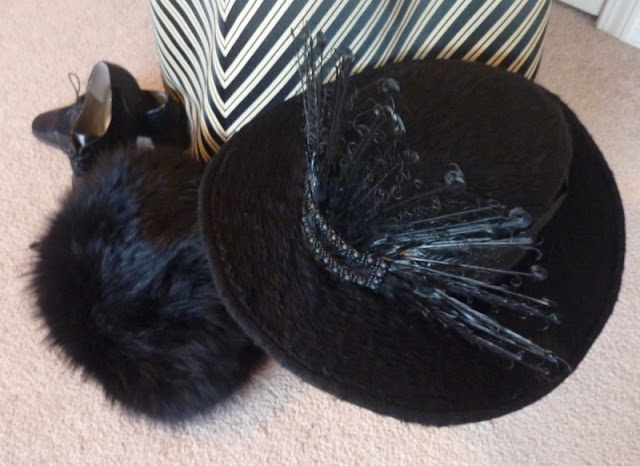 Another accessory will be a black fur muff.  It is so fluffy!!! 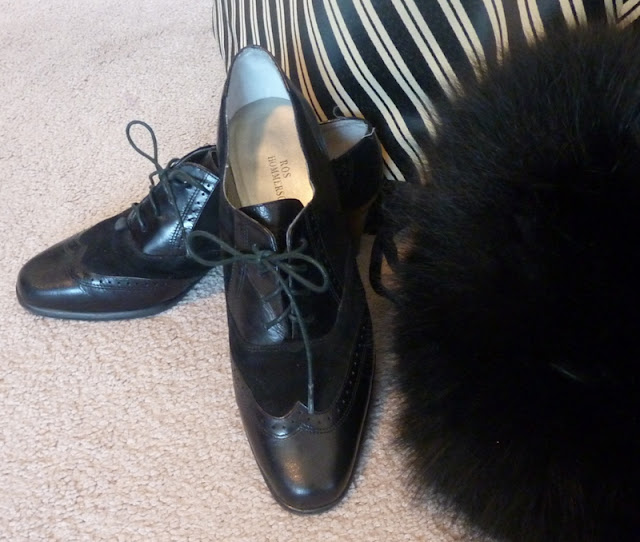 The shoes aren't vintage, but they are oooooh sooooooo comfortable!!!  I am actually looking forward to wearing these!!  I dare my feet to yell at me! 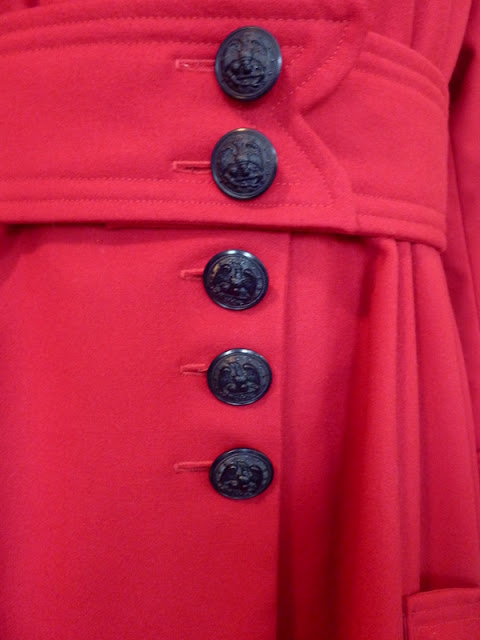 I found these fabulous buttons at Something Special Antiques.  I know they are antique ones from the construction of them, but not sure from what time period.  I don't really have a problem with using them on my jacket as they are so incredible and stand out really nicely as if to say, "Look at me!!  I am a fabulous button with an eagle on me!!!!"

I just thought of something!!  This is the second outfit in an row that I have sewn completely from stash stuff!!!  I am Huzzah thrilled!!!!!

Well, I am looking forward to taking a break from sewing.  I know, that is probably a weird thing to say, but school, and canning, and soups and stews are now calling my name and I must obey!!

Be Blessed my friends!!  I hope this coming week is a wonderful one for you!